The test represents Uber Chief Executive Travis Kalanick’s vision to have a fleet of autonomous vehicles replace the company’s roughly 1.5 million drivers and to ferry food, packages and commuters around urban centers. 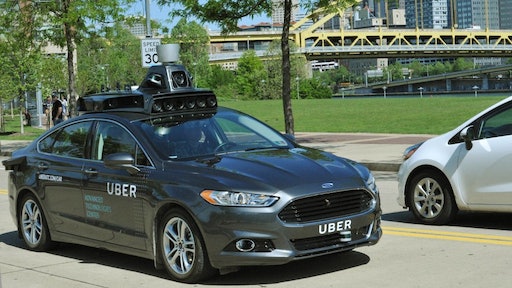 Uber Technologies have begun testing self-driving Ford Fusions in Pittsburgh, Pa., which the company plans to use for delivering food and other packages, according to The Wall Street Journal. On Monday, autonomous vehicles manned by a backup driver and an engineer in the front seat rolled through some of the city’s neighborhoods as pedestrians curiously looked on. During a demonstration ride for The Wall Street Journal, a vehicle obeyed speed limits, stayed in its lane and never sped through yellow lights. The vehicle struggled with some obstacles and once jarringly hit the brakes.

The test represents Uber Chief Executive Travis Kalanick’s vision to have a fleet of autonomous vehicles replace the company’s roughly 1.5 million drivers and to ferry food, packages and commuters around urban centers.

Uber is using Pittsburgh as an experimental lab, inviting the public to participate before any laws are written for the autonomous vehicles. The company invited up to 1,000 of its most loyal customers to test the self-driving.

A partnership leads to greater value. It’s the difference between saving $100 on a shipment or saving 10% on total freight spend.
August 1, 2021
Latest

Associate editor Brielle Jaekel speaks with driver and social influencer Clarissa Rankin about her experience on the road and online.
Brielle Jaekel
July 27, 2021

A partnership leads to greater value. It’s the difference between saving $100 on a shipment or saving 10% on total freight spend.
August 1, 2021

The acquisition will create one of the leading technology logistics technology platforms, having one of the largest and most comprehensive managed transportation and logistics networks globally.
Uber Freight
July 22, 2021

By using data, connectivity and AI-powered analysis, companies can have a huge competitive advantage if they can act on the issues at hand.
Teletrac Navman
July 14, 2021
Follow Us