However, demand was up in major markets, a signal that spot rates may soon rebound. 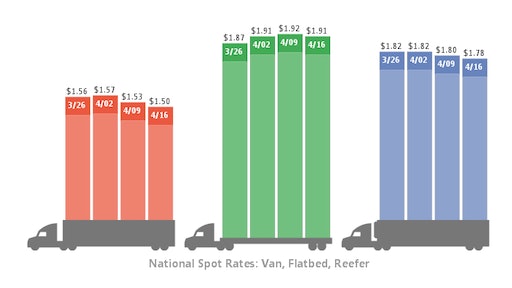 However, demand was up in major markets, a signal that spot rates may soon rebound.

The number of trucks posted on DAT load boards increased 4.5 percent while the number of available loads fell 6.4 percent compared to the previous week. However, demand was up in major markets, a signal that spot rates may soon rebound.

Several major markets experienced higher average outbound demand, particularly in the West, but in general, rates have yet to firm up.

The number of posted refrigerated loads declined 1 percent last week while truck posts gained 4 percent. The reefer load-to-truck ratio fell 3 percent to 2.6 and the average spot rate fell 2 cents to $1.78 per mile. Reefer volumes increased across the Western U.S., where produce harvests are under way, yet rates were mixed. Demand for reefers remains solid in the Southeast where spot truckload freight volumes and prices both rose last week.

Flatbed load volume was down 9 percent and truck were up 6 percent. Nationally, the flatbed load-to-truck ratio was 20.2, down from 23.5 the previous week. The average spot flatbed rate fell 1 cent to $1.91 per mile.

The national average diesel price rose 3 cents to $2.16 a gallon.

Many major retailers are asking companies to switch from wood to more sustainable plastic pallets, and with good reason. The experts at iGPS, the leaders in sustainable supply chain solutions, have created the definitive guide to plastic pallets.
March 2, 2021