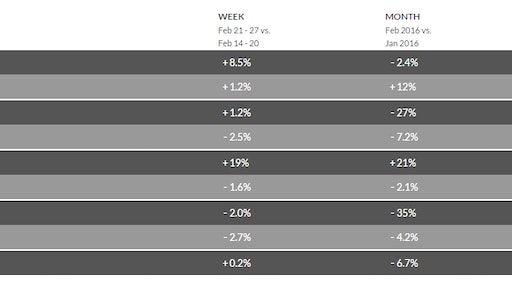 The number of loads on the spot market jumped 8.5 percent during the week ending Feb. 27, 2016 while available capacity rose 1.2 percent, according to DAT Solutions, which operates the DAT network of load boards.

The number of van load posts increased 3 percent while truck posts gained 2 percent. The load-to-truck ratio held steady at 1.4 loads per truck, meaning there were 1.4 van loads for every truck posted on the DAT network. The national average van rate declined 4 cents to $1.54 per mile.

Reefer load posts fell 2 percent and truck posts were up less than 1 percent last week. As a result, the load-to-truck ratio slid 2 percent, from 2.9 to 2.8 loads per truck, while the national average reefer rate fell 5 cents to $1.79 per mile.

Flatbed load volume rose again, up 17 percent, while available capacity decreased 2 percent. That yielded a 19 percent increase in the national load-to-truck ratio, up from 10.6 to 12.6 loads per truck. The national average flatbed rate gave up 3 cents last week to $1.80 per mile.

The national average diesel price rose 1 cent to $1.99 per gallon.