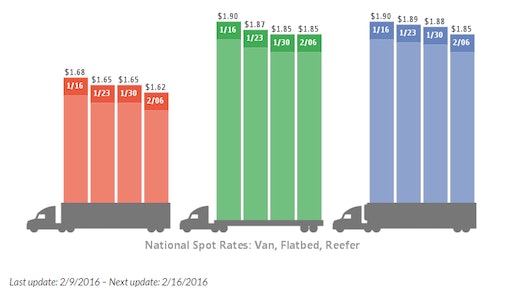 The combination of fewer posted loads and 2.5 percent more capacity helped hold rates down compared to the previous week. Declining fuel prices also played a role: diesel prices fell 3 cents to a national average of just under $2.01 per gallon, an 11-year low. Freight brokers usually quote a one-time rate that includes both the line-haul rate and the fuel surcharge.

Van load posts declined 14 percent while available capacity increased 4 percent, which sent the van load-to-truck ratio down 17 percent. The decrease from 1.7 to 1.4 loads per truck means there were 1.4 van loads for every van posted on the DAT network. In the reefer market, there were 11 percent fewer loads while truck posts added 1 percent. The load-to-truck ratio declined 12 percent from 3.8 to 3.4 loads per truck.