The number of posted reefer loads rose 6 percent and truck posts declined 3 percent, leading to a 9 percent increase in the reefer load-to-truck ratio (3.8 loads per truck). 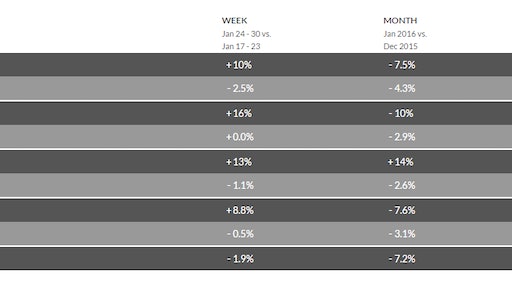 Load-to-truck ratios on the spot truckload market got a bump during the week ending Jan. 30, possibly due to pent-up demand after the previous week’s storms, according to DAT Solutions, which operates the DAT network of load boards.

On the van market, the number of load posts was up 13 percent while truck posts fell 3 percent, leading to a 16 percent increase in the van load-to-truck ratio (1.7 loads per truck). The national average van rate was unchanged at $1.65 per mile.

The number of posted reefer loads rose 6 percent and truck posts declined 3 percent, leading to a 9 percent increase in the reefer load-to-truck ratio (3.8 loads per truck). Overall, the national average reefer rate declined 1 cent to $1.88 per mile. Available flatbed load volume was up 11 percent while capacity increased 2 percent, yielding a 13 percent increase in the flatbed load-to-truck ratio to 8.3 loads per truck. The average flatbed rate was $1.85 per mile, down 2 cents compared to the previous week.

Diesel prices fell another 4 cents to a national average of $2.03 per gallon.

For the month of January, van load posts were down 14 percent compared to December 2015. Van posts fell 4 percent, which sent the average load-to-truck ratio from 2.1 to 1.9 loads per truck. Compared to January 2015, the ratio was down 32 percent.

Flatbed load posts rose 10 percent compared to December and truck posts declined 4 percent. As a result, the load-to-truck ratio for the month rose 14 percent, from 7.5 to 8.6 loads per truck. Compared to January 2015, the ratio was down 31 percent.

Reefer spot market load volume declined 13 percent in January compared to December, and capacity was down 6 percent. The resulting load-to-truck ratio fell 8 percent, from 4.9 to 4.5 loads per truck. Compared to January 2015, the ratio fell 50 percent.

Associate editor Brielle Jaekel asks the CEO of Spirit Hub questions pertaining to online sales of alcohol and how it works.
Brielle Jaekel
January 5, 2021
Follow Us