The Teamsters Rail Conference stated its opposition to the forced takeover attempt in a letter from Rail Conference President Dennis R. Pierce to the Surface Transportation Board (STB) dated January 18, 2016. 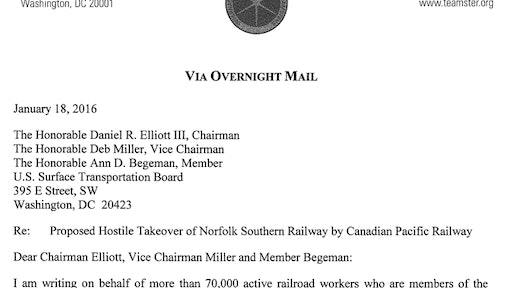 The Teamsters Rail Conference represents more than 70,000 active railroad workers whose constituent unions are the Brotherhood of Locomotive Engineers and Trainmen (BLET) and the Brotherhood of Maintenance of Way Employes Division (BMWED).

The Teamsters Rail Conference is adding its voice to the dozens of elected officials, shippers and labor unions that strongly oppose an apparent attempt at a hostile takeover of Norfolk Southern (NS) by the Canadian Pacific Railway (CP), according to streetinsider.com.

The Rail Conference represents more than 70,000 active railroad workers whose constituent unions are the Brotherhood of Locomotive Engineers and Trainmen (BLET) and the Brotherhood of Maintenance of Way Employes Division (BMWED). The group stated its opposition to the forced takeover attempt in a letter from Rail Conference President Dennis R. Pierce to the Surface Transportation Board (STB) dated January 18, 2016.

Instead of the “substantial value creation” identified by CP in its December 16, 2015 presentation to investors, the Rail Conference predicts the opposite. CP’s hostile takeover of NS would trigger a round of additional Class I rail mergers, eventually reducing the industry to just two transcontinental railroads, “which is not in the best interests of our members, U.S. shippers or the public.” It could lead to a “death spiral” of job cuts and deferred plant and equipment maintenance industry wide, resulting in the loss of vital service — similar to the crisis that crippled rail service in the Northwest and Midwest between the 1960s and late 1970s.

Pierce, who is also National President of the BLET, raised questions about CP’s reliance upon a voting trust to move ahead with the forced takeover outside of the STB’s standard rail merger approval process. “At the very least, the Board should immediately make clear to CP that it will not tolerate any attempt to short-circuit the process set forth in the law and accompanying STB regulations.”

President Pierce concluded: “CP’s proposal — while it may be good for Wall Street, hedge funds and certain investors — is bad for the shippers, bad for the railroads’ workers, and bad for the public. I urge the Board to reject any and all attempts at this hostile takeover, and thank you in advance for your most serious consideration of our position.”