In addition to the benefits offered by some alternative fuels such as lower costs, smaller carbon footprints and reduced emissions, fleet managers also have to consider the available fueling infrastructure, tax credits and incentives. 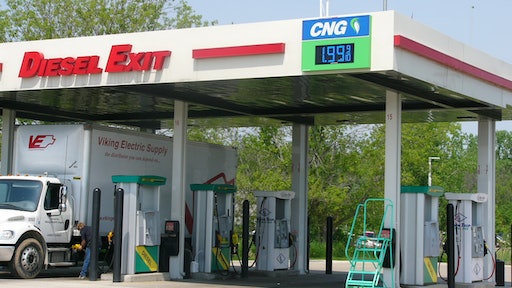 Public Compressed Natural Gas (CNG) fueling stations like this one in New Berlin, Wis., are starting be built in more areas as the infrastructure for alternative fuels continues to increase.

With general concerns over energy security and the thought of stronger emissions regulations from the Obama Administration on the way, fleet professionals across the food and beverage sector are focusing on alternative fuel vehicles (AFVs), according to an article in the recent Food Logistics Magazine.

Even though the price of diesel fuel is still over a full dollar cheaper now than it was in May of 2014, it’s noteworthy that the price has gone up for six straight weeks. Most thought leaders involved in transportation are likely convinced the current low prices are only temporary.

In addition to the benefits offered by some alternative fuels such as lower costs, smaller carbon footprints and reduced emissions, fleet operators have to consider the upfront costs, including the need to train drivers and maintenance technicians about new technologies. Fleet managers also have to consider the available fueling infrastructure, tax credits and incentives, all of which can vary significantly among geographic regions.