Lineage Logistics Reduces Energy Use by 34 Percent with IoT

Lineage Logistics partnered with ndustrial.io and AT&T Internet of Things to reduce energy use in 78 of its cold storage facilities. 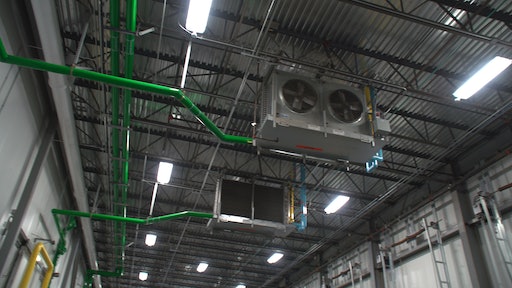 Freezing and storing frozen food at the proper temperatures requires a lot of electricity. And for cold storage warehousing and distribution company Lineage Logistics, which handled more than 35 billion pounds of food products in 2017, equivalent to about 25 percent of the U.S. third-party cold chain, according to Elliot Wolf, Lineage Logistics' vice president and chief data scientist, that energy use comes at a significant cost.

Lineage Logistics maintains the temperatures in its more than 120 facilities at zero degrees. Some are refrigerated, while others have equipment for blast freezing, which requires temperatures of negative 20 degrees. Consequently, the company's electric bill reaches tens of millions of dollars each year.

According to an AT&T 10x case study, Lineage realized in 2014 it needed to make a change not only to drive electric costs down but to reduce its environmental impact. With a new focus on energy, the company had a simple goal: "Do more with less by increasing the amount of food per square foot in their facilities while lowering electricity usage," the case study notes.

To meet this goal, Lineage enlisted the help of ndustrial.io, a company focused on using detailed operational data to optimize energy use in industrial facilities. In order to collect and use data from multiple warehouse and refrigeration systems across Lineage's portfolio, ndustrial.io installed 3-15 smart meters per facility "to get more granular real-time electricity usage data at one-minute intervals," the case study explains. But, ndustrial.io needed even more granular temperature readings. They then installed sensors on the top and bottom of racks across several Lineage warehouses. The two companies also developed a data analytics platform to compare food production and energy usage for each shelf in the warehouse.

The success of this solution, however, relied on highly secure and dependable connectivity. This is where AT&T Internet of Things connectivity came into play.

"By integrating AT&T SIMs and utilizing the AT&T Control Center, an automated connectivity management platform, ndustrial.io was able to send time-sensitive data from the warehouses to the analytics engine in the cloud with high security," the case study notes.

The results of the solution were energy and cost reductions in both expected and surprising ways. They include:

1. Reduction in absolute energy and energy per unit of food. According to the case study, data collected by the systems show that since 2014, Lineage's yearly energy costs have declined 8 percent at the 78 warehouse the system has been installed. Unexpectedly, the throughput at these facilities increased over the same time period, meaning that the cost of electricity used for each item of food has decreased by 34 percent.

2. Energy reduction during afternoon peak usage times lowers grid demand for the community and reduces costs for Lineage. Electric utilities can add a "demand charge" (a high rate or extra fee) during peak usage times, which are typically during hot afternoons when the need for air condition is high. On the flip side, utility companies often also reduce costs when temperatures drop in the evening. Data from ndustrial.io has helped Lineage recognize these patterns and "super-cool" their warehouses during low-demand time at night.

"This creates a virtual 'battery' of coldness," the case study says, so that Lineage can turn off its cooling equipment and use less energy during peak hours.

3. Faster blast freezing. During peak strawberry season, Lineage blast freezes 4-6 million pounds of strawberries each day. This process is important to improve food quality and reduce the likelihood of pathogens and other contaminants, but it consumes a lot of energy. Working with ndustrial.io, Lineage was able to add sensors to the freezer and create a customized dashboard to track the freezing process. The result, according to the case study, is a reduction in average freeze time from nearly 100 hours to about 50 hours, or a 50 percent reduction in energy.

"For Lineage, the focus now is on expanding the system into areas where demand charges make the payback even quicker," the case study concludes.