All Aboard the Road-to-Rail Conversion 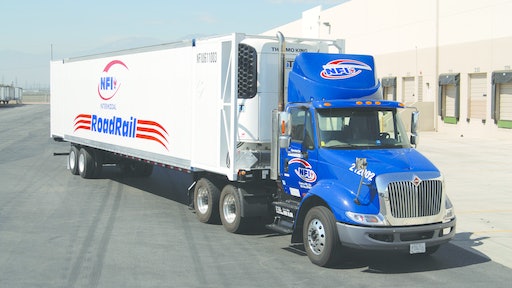 The trend to convert truck freight to rail shows no signs of slowing down, with rising fuel prices, capacity concerns and sustainability initiatives putting more pressure on companies to look for alternative transportation options.
While trains played a significant role in the domestic food supply chain decades ago, especially for refrigerated shipments, that business segment withered during the 1970’s and 80’s when railroads ceded to the trucking sector.
However, there are dramatic changes underway.

Can rail improve the quality and speed-to-market for fragile, perishable products? The simple answer is “yes.” In light of driver shortages, hours of service constraints, CSA 2010, tighter truckload capacity, rising rates and carbon footprint reductions, early adopters are now thinking there has to be a better way.
Given the double-digit increases in the consumption of perishable foods, time-to-market improvement targets are now at the forefront. And, reducing time-to-market goes hand-in-hand with transport reliability. With its operating partners CSX and Iowa Pacific, Green Express (GX) has developed an innovative approach in moving perishable goods from South Florida to the Chicago metro area and beyond.
Shippers are pressuring transportation providers to rein in rates and they also want tighter in-transit quality controls. These are two areas where GX performs well. The use of CSX’s dedicated unit train (a combination of refrigerated box cars, containers and trailers) will match the transit times of trucks, while monitoring the condition of products in ways that are meaningful for the shipper and their customers. Simply put, it is not business as usual.
When we combine the rise in demand for more wholesome, fresh food with more stringent food safety regulations, and top that with ever-increasing customer quality mandates…and oh, by the way, make sure it’s less expensive…a new operating model is required.
GX will be able to move perishable products about four times more efficiently than truck. It does this using highly prescribed and controlled ways assuring products arrive at optimal quality. In addition, GX and its partners are taking the lead in optimizing the use and combination of ocean vessels, ports, rail and last-mile delivery fleets in expediting fresher products to market.
Complementing GX’s distribution economies is its focus on food safety. GX has built-in systems and processes in compliance with standards proposed in the Food Safety Modernization Act (FSMA), as well as conformity to the Global Food Safety Initiative (GFSI). The GX team is well versed in GFSI, considering that one of their executive team members headed the technical subcommittee “Guidance for Food Sector Category 25 and 26 – Warehouse, Logistics and Transportation.” GX will be a GFSI certified train, and this is key because the GFSI sets standards that are recognized throughout the world.
The GX strategy starts and ends with the customer. It does this at significantly less cost for growers, processors, shippers and retailers, and with controls in place that assure safe, quality products. Ultimately, the consuming public benefits.
GX plans to launch the service in Q4 of this year.