It’s in the range of possibilities that some areas could shut down barge traffic altogether and present a significant impact on already disrupted supply chains. 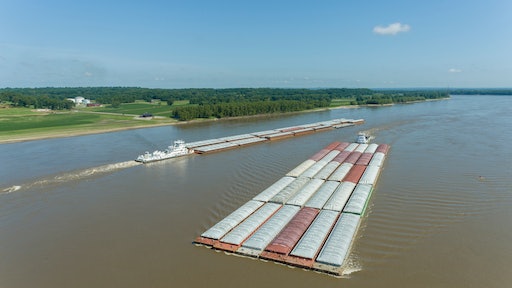 The Mississippi River is a main waterway that runs south from Lake Itasca in Minnesota to Plaquemines Parish in New Orleans, La. The health of the Mississippi, the second-longest river in the United States, has impacts that spread globally.

Recently, the Mississippi River is approaching record-low water levels due to a lack of rainfall since late August and the situation has become dire with little rainfall forecast for the coming months. Continued drought will result in further lowering of river levels, putting greater restrictions on barge numbers, traffic and capacity. In some areas, the water is so low that barges are getting stuck in mud and sand. It’s in the range of possibilities that some areas could shut down barge traffic altogether and present a significant impact on already disrupted supply chains.

The supply chain concerns that come with low Mississippi River levels are over the wide range of goods that move throughout the basin. At the lower end of the Mississippi River, barges move petroleum and petroleum products and key commodities such as iron, steel, grain, rubber, paper, wood, coffee, coal, chemicals, fertilizer and edible oils; these goods primarily move northbound. The northern end relies heavily on the river to move agricultural goods. Corn and soybeans from the Midwest, one of the most concentrated agricultural belts in the world, rely on the Mississippi River to move key goods to the Port of New Orleans.

According to the U.S. Department of Transportation’s Bureau of Transportation Statistics, at the southernmost end, the ports of South Louisiana and New Orleans account for roughly 500 million tons of shipped goods per year. Nearly 60% of all grain exported from the United States is transported on the Mississippi River through the ports of New Orleans and South Louisiana.

The timing is problematic with the Midwest’s harvest season in full gear. Due to the abnormally dry weather this year, the harvest has been and will continue to be fast paced. This autumn will be one of the fastest rates of harvest in decades. The issue is not getting the crops out of the fields but delivering them to their destinations – especially overseas.

It's an expensive problem to try to solve as well. As low water levels impact barge traffic, freight prices are spiking higher. According to the USDA, rates have increased by 218% from 2021 for shipments on the Mississippi River originating from St. Louis.

Typically, barges are considered the cheaper transportation alternative, but some logistic companies are looking to secure other transport options to avoid drought-related delays. The USDA reports since the beginning of September, there have been nearly 40% fewer barges unloaded at the Port of New Orleans compared to the 5-year average. Rail or trucking options, unfortunately, lack the same capacity as barges, making them expensive alternatives with costs up to five times more than barge fares.

A single barge can haul as much cargo as 16 railcars or 70 trucks. This makes barges the more sustainable option as well. Rail generates 39% more carbon dioxide than barge travel. For trucks, the figure is 371%. Hence, if the capacity is available, the mode of transportation can be switched from barge to rail/road, but it is extremely expensive and a poor choice from an environmental standpoint.

Some relief may come to the Mississippi River as winter approaches. Historically, the snow that falls in the northern states that the river passes through will eventually flow back into the waterway. In the meantime, businesses that have exposure to disruptions in river transportation, either directly or indirectly, will need to monitor the situation closely. Changes in river levels can have ramifications both physically and economically and there’s no easy solution to this unique issue.