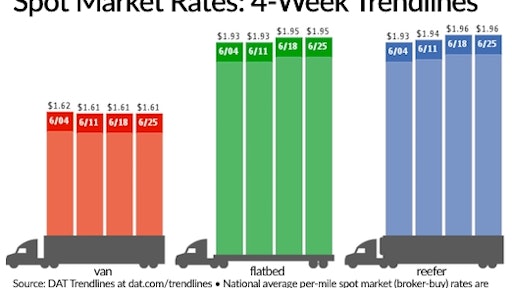 National average spot truckload rates were unchanged as spot market activity slowed during the week ending June 25, according to DAT Solutions, which operates the DAT network of load boards.

The van load-to-truck ratio rose 3 percent to 2.8 loads per truck, reflecting a typical buildup in demand to close the second quarter. The national average spot van rate was unchanged at $1.61/mile for the third straight week.

California markets continue to pick up, with the average outbound rate from Los Angeles adding 7 cents to $2.21/mile. Demand continues to heat up for vans in the Southeast, as loads from Charlotte, N.C., averaged $2.09/mile, up 5 cents, while Atlanta rose 4 cents to $1.94/mile.

The national average spot market rate was unchanged at $1.95/mile. However, a 9 percent increase in the load-to-truck ratio—to 5.8 available reefer loads per truck—signals that rates are likely to rise soon due to end-of-quarter and pre-holiday demand.

At $1.95/mile, the national average flatbed rate was unchanged compared to the previous week and several markets and lanes gave back last week’s gains: