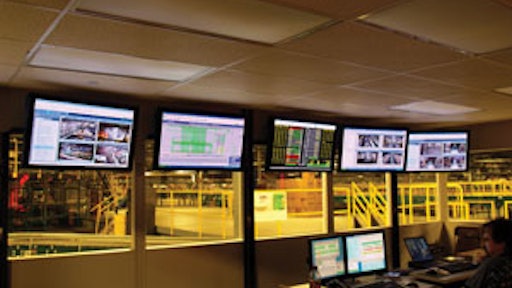 Southern Wine and Spirits of America Inc., one of the nation's largest liquor distributors, was feeling growing pains. Sales were booming for the Miami-based firm, so it decided to expand its distribution centers-as well as install state-of-the-art automation.

Southern represents approximately 1,500 wine, spirits, beer and beverage suppliers from around the world and distributes nearly 5,000 individual brands, including a limited amount of beer, water, juices and mixers. Employees call on or service over 140,000 retail and restaurant customers across the country.

"The decision to expand our DCs was driven by our volume growth," says Bobby Burg, senior vice president of supply chain strategy for Southern. "Like in many other industries there is consolidation occurring, meaning fewer and fewer wholesalers. Much of our growth is coming through consolidation."

"Not only are we expanding our distribution centers, but we are consolidating them. In Florida, before this project started in Lakeland, we had five DCs. By the time it was complete, we were down to two. We are putting in more automation, more technology and building bigger facilities.

The Lakeland DC was completed and went live in January, 2006. The company made the decision to have a central DC back in 2003, prompted by its rapid growth and its desire to improve efficiencies.

Although the majority of deliveries encompass full cases, there is some full pallet delivery to supermarkets and other chain stores, and a small amount of cross-docking to accommodate. However, an interesting part of this operation is the DC's split-cases. Restaurants and bars frequently want to order just one bottle, and do not want to buy a full case because they usually do not have the storage capacity.

So, the conveying and sortation systems had to manage a high volume of split-case orders. The material handling solution that Dematic provided effectively managed this scenario.

Dematic's roller accumulation conveyors progressively release loads or release a slug of loads. It features smooth starts and stops to ensure that fragile and unstable loads can be safely accumulated and conveyed. Southern's cases weigh an average of 35 to 40 pounds. This system has the strength and versatility to work efficiently in heavy load environments to transport loads, stop and accumulate, reorient and stage.

The 7,000 feet of conveyers in place in the DC are capable of moving product at a rate of 500 feet-per-minute, which is fast for this industry considering the product is almost all glass, and high-end. It is important that the system be able to convey with minimal breakage. The breakage percentage with this system is very low, approximately .075 percent. That is about 50 percent lower than the average breakage for this industry. Southern is handling 11 million cases a year, at an average value of $100 per case that represents a substantial improvement above industry norms.

The slug merge system by Dematic controls the staging and release of cartons into the high-speed sorter, increasing system throughput and eliminating bottlenecks. The merge evens out differentials from multiple pick areas and optimizes batch cycling.

The cases are scanned upstream on the conveyer and then released into the merge without any gaps. Like a train of product that is released at one time instead of scanning each individual carton. This creates very little gap between cartons which gives a faster movement through the sorter than with a conventional merge.

The highest capacity sortation that Southern had achieved before it built the Lakeland DC was 6,000 cases-per-hour. The company determined that to get a higher capacity of cases through the building would require a much more high-speed sortation system. With the Dematic sorter there are 16 spurs coming off of the sorter which are going to twelve truck lanes for shipping. The system capability can easily be expanded to twenty chutes.

The new sortation system has had a direct impact on the picking process. "In the old paper process when we were reading a sheet of paper to put a case on the line, we would shoot for maybe 180 cases per-man-hour for a good picker," says Burg. "Now, our minimum on a pick line is 250 cases per man-hour, a 40 percent productivity increase."

The sorter is capable of handling a product volume of 10,000 cases an hour, and an additional 12,000 bottles in split cases per hour. Before, the company averaged about 150 cases per-man-hour for the entire DC, now it is handling 225 cases per-man-hour. In terms of shipping accuracy Southern was averaging one percent error out the door before, now it averages 0.2 percent error, a 60 percent reduction.

"A five-sided scan tunnel at the end of the sorter provides for the verification of all the SCC codes (Source Classification Code) to the shipping links," says Burg.

"This a technical customization that we did using point-camera technology to read the bar codes on the cases, and compare that to the shipping labels. That ensures that they have the right shipping label applied to the right case, and the customer will get what they ordered. This is a new development for Southern, it has been very successful in achieving a high rate of accuracy."

The success of the first three DCs for Southern has prompted the company to continue its upgrade of even more of its distribution centers into its "New Generation" format. Currently, there are several DCs under construction throughout the U.S. With demonstrable improvements in productivity, increased accuracy and streamlined efficiency, the company is surely in an enviable position to capture more market share, and provide even better service to its customers.

FMCSA announced that it is proposing and seeking public comments on a new pilot program to allow drivers aged 18, 19, and 20 to operate commercial motor vehicles in interstate commerce.
International Foodservice Distributors Association (IFDA)
September 8, 2020
Follow Us