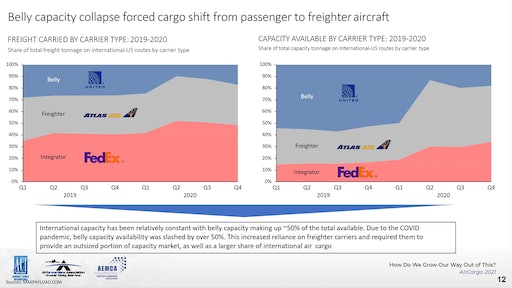 Prior to the Coronavirus disease (COVID-19) pandemic, passenger travel dominated the aviation industry and airports around the world focused on boosting passenger traffic in their markets. As capital flowed to passenger terminal developments and refurbishments, dedicated air cargo facilities were largely left undisturbed. To increase their marginal revenues, air carriers regularly utilized surplus space alongside passenger luggage in the “belly” of their aircraft for cargo, which is why approximately half of all air freight was transported through the dedicated cargo operations of passenger airlines.

When air travel was effectively halted due to the pandemic, airlines began to reassess the importance of air cargo to their operations. Air freight became a critical component of the COVID-19 economy, as consumers embraced online shopping with enthusiasm while lockdown measures were in place, driving an increase in the need for delivery services. Critical personal protective equipment (PPE) and medical supplies were flown to hot spots around the world to aid protection against virus transmission and treat those infected. This increased demand for cargo space was met with a simultaneous evaporation of passenger travel and the subsequent “belly space” that accompanied those flights.

This dramatic market shift pushed air cargo rates to 3-4 times what they had been in 2019. Increased demand and attractive yields persuaded passenger carriers to begin using their “out of service” passenger aircraft for pure cargo runs, utilizing the entirety of their plane’s bellies for freight. When demand exceeded even that space and passenger cabins remained empty, some airlines added capacity by utilizing passenger seats with boxes secured by seatbelts or netting or even removing the seats entirely to allow cargo to be tied down to the main cabin floor. These converted aircraft were dubbed “preighters,” and accounted for a significant portion of the aviation traffic during the height of the lockdown period. Thousands of preighter flights over the course of the pandemic have flown under the banners of carriers around the globe.

While increased e-commerce traffic and PPE shipments dominated early preighter use, delivery of temperature-sensitive vaccine shipments opened additional demand for timely and climate-controlled cargo space. The decision to convert main cabin space on passenger aircraft for cargo is not without pitfalls, however. In the tight confines of the passenger cabin, machinery cannot be used to load heavy cargo. This makes preighter use labor intensive for ground crews on both ends of the flight and lowers profit margins. To justify the increased labor costs of loading and securing cargo within the cabin, priority is often given to items that are delicate or perishable such as seafood or produce, which loses value if it spends too much time in transit.

Historically, ocean freight followed by truck transportation have been the preferred supply chain network for handling most perishable food products. Recent disruptions and delays in ocean freight service, like the blockage of the Suez Canal earlier this year, have provided compelling incentives to consider airfreight as an alternative. This shift has been somewhat limited by strong demand for air cargo capacity driving rates that are unsustainable for low-margin products. In the near term, expect to see higher-yield, time-sensitive food products continue moving via air to speed transit time to market, like seafood or specialty seasonal produce such as cherries shipped globally out of Washington.

Prior to the pandemic, air cargo accounted for about 12% of total airline revenues. A recent investigation by McKinsey noted that among airlines around the world that disclosed operating performance in 3Q2020, only 21 airlines reported positive operating profits, down from 77 in 2019. Of these 21 airlines, air cargo revenue averaged 49% of total revenues, more than three times as much as the previous average. Until those aircraft are delivered, if freight demand remains robust and yields remain around their current status, the drive for freight-optimized passenger and preighter flights is likely to continue in the near term.

With the current trends in aviation, additional capacity for air cargo will not only be needed to satisfy new demand, but also freighters and integrators will need to absorb spillover demand from “belly cargo.” While the current lack of supply of freighters is enough of a reason for preighters to continue operations, these trends will change as cargo yields fall with increased freight capacity and the cost of preighters outweighs revenues.

As passenger demand recovers, however, some airlines are assessing the use of smaller wide-bodied aircraft that have less belly capacity and may contribute to a slower recovery of full cargo capacity. Other airlines, jolted from complacency about the lack of diversity in their revenue streams by the loss of passenger traffic, may be inclined to capture marginal cargo demand by adding freighters to their aircraft fleet, perhaps through conversion of some passenger aircraft.

In the aviation industry over the last year, market fundamentals have changed, and air cargo demand is positioned to run away from current capacity. As a result, anticipate that preighters will continue as an interim solution to extend capacity while cargo yields remain high enough to justify increased operating costs. Over the next several years, continue to see airlines assessing whether adding dedicated freighters to their fleets makes economic sense for the long-term financial outlook of their businesses.

At present, all indicators point to a robust market for air freight as consumer demand continues for e-commerce and expectations of rapid merchandise delivery that were accelerated by pandemic habits become ingrained. With this steady demand and the current limits on freight capacity, expect more attention being focused on air freight than it garnished before the pandemic.

This solution meets the demand for more supply chain visibility in commercial shipping, which has remained one of the biggest challenges faced by cargo providers today.
Unisys
August 17, 2021
Safety & Security