The domestic container business experienced gains of 3.3 percent in the third quarter, which kept the overall Intermodal volume loss to 4.6 percent. 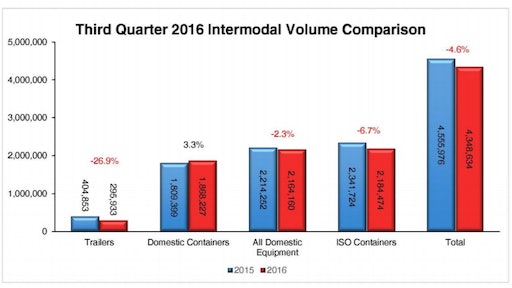 The Midwest-Northwest corridor's traffic rose 3 percent, dominated by containers. However, all other corridors posted declines, ranging from 0.8 percent in the Northeast-Midwest and Trans-Canada lanes, to 11.2 percent in the South Central-Southwest corridor. Midwest-Southwest volumes, which are the highest, dropped 5.3 percent.

Total intermodal traffic recorded another volume decline in the third quarter of 2016, according to the Intermodal Association of North America’s latest quarterly Intermodal Market Trends and Statistics report. Contributing to this loss were intermodal trailer volumes which dropped 26.9 percent and international shipments which fell 6.7 percent. The domestic container business experienced gains of 3.3 percent which kept the overall volume loss to 4.6 percent.

“The Q3 results were in line with the previous quarter, reflecting sluggish market conditions,” said Joni Casey, president and CEO of IANA. “Projections for 2017 are more optimistic, based on continued increases in consumer spending and expectations that the international side of the equation will stabilize.”

The seven highest-density trade corridors, accounting for 63.6 percent of total intermodal volume, collectively dropped 3.9 percent year over year. The Midwest-Northwest corridor saw a 3.0 percent gain in traffic, dominated by containers. All other corridors posted declines. These ranged from only 0.8 percent in the cases of both the Northeast-Midwest and Trans-Canada lanes, to 11.2 percent in the South Central-Southwest corridor. MidwestSouthwest volumes, which are the highest, shrank by 5.3 percent.

Regional losses were widespread, based largely on international traffic. At one end, the Mountain Central and Mexico regions were both in negative territory at 11.5 percent. Western and Eastern Canada came closest to breaking even with -0.2 percent and -2.9 percent respectively. The Southwest, Midwest and Southeast regions clustered around the -4.6 percent industry average. Positive international shipments supported overall growth of 0.1 percent in the Northeast and 4.4 percent in the Northwest, the two exceptions in the third quarter.

Intermodal Marketing Companies again demonstrated clear gains in the highway market sector. Thanks to excess trucking capacity, highway volumes were up 14.6 percent from the previous year. Intermodal loads fell 11.6 percent. The net result for reporting IMCs was a total volume decrease of 0.1 percent.

Intermodal Rail Takes A Bigger Piece of the Pie