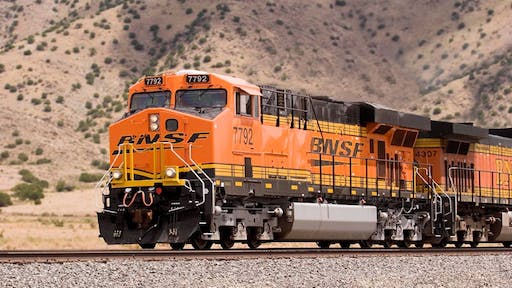 Looking for new strategies to enable your business to cut costs and increase supply chain efficiency? Want to boost your reputation as an environmentally conscious company at the same time? Then consider investigating how you might use the intermodal transportation network to send or receive shipments.

Intermodal moves products with multiple modes of transportation. While it relies primarily upon rail shipments, it frequently involves sending merchandise via truck, ship or even by plane. Freight containers are utilized in intermodal, which eliminates direct handling of shipments and potentially reduces damage as well.

Its popularity shows signs of healthy growth. The total number of trailers and containers shipped by intermodal rail increased by nearly 33 percent between 1998 and 2008. Annual shipments account for nearly 25 million containers, according to the Intermodal Association of North America (IANA), Calverton, MD.

Demand for intermodal has meant increased activity for rail companies, such as Union Pacific, one of the nation’s largest intermodal providers. Rail shipments—once the primary method for moving fresh fruit, vegetables and other perishable products—began declining in the 1960s. Increasing interest in the use of intermodal started in the 1990s, partly as a reaction to rising fuel costs. Rail cars were redesigned, refrigerated and enlarged for handling of bigger loads.

The commitment to intermodal hasn’t waned. Rail shipments tripled between 1980 and 2002, according to the Association of American Railroads (AAR), Washington, and companies have invested heavily in the infrastructure and the associated technology. Union Pacific Corp., Omaha, spent more than $30 billion on its rail network since 2000, enabling the construction or modernization of intermodal facilities and creation of a route structure that offers truck-competitive delivery services.  The company boasts the largest and most modern fleet of refrigerated boxcars and the industry’s most diverse rail network.

Today, intermodal is being used with increasing frequency in the food and beverage industries. Shipments of fresh produce, frozen goods, as well as beer and wine, are being sent by industry participants now relying more and more on intermodal transportation solutions.  While intermodal providers cite a number of reasons for considering adoption of this mode of shipping, three interrelated themes emerge: cost reduction, improvements in efficiency and environmental impact.

According to the EPA’s Smart Way Transport Partnership, intermodal transportation doesn’t aim at eliminating truck shipments; it takes advantage of the best attributes of both truck and rail shipping, integrating them for improved efficiency. Since rail can save considerable fuel, railroad cars can carry cargo over long distance, high volume corridors. Trucks or barges move the loads between the rail terminals and the cargo’s ultimate destination.

Rail transportation also boasts better fuel economy, an important cost variable that can affects shippers, their customers and can make products more price competitive for consumers. According to Tom Lange, director of corporate communications at Union Pacific, the company’s intermodal fleet can move a ton of freight nearly 500 miles on a single gallon of diesel fuel, adding significant environmental benefits to the equation.

And intermodal shipping is better prepared to handle surges in demand, because of speed and improved reliability. “Shippers can benefit from lower costs compared to over-the-road methods, scalable capacity, a greener transportation method and predictable schedules,” says Mnichowski. “Another benefit is increased security due to the general public not having easy access rail yards or container ports.”

While intermodal rail shipments can clearly translate into reduced highway congestion and reduced emissions, those aren’t the biggest improvements available. “Over the long run the ability to control costs is a primary driver that will benefit customers and consumers, says Mnichowski.

Throughout the supply chain, it’s cost-control benefits that seem to provide intermodal with a significant competitive advantage. “Because of the service and reliability we deliver, our customers can more tightly manage their supply chains, resulting in reduced inventory costs,” says Lange. “That helps our customers be more competitive with price-conscious consumers, especially given today's economic climate.”

Intermodal In The Industry

While they’re not regarded as an intermodal service provider, Railex has been making an impact on the beverage industry. The company uses unit trains of refrigerated cars to provide five-day, non-stop, coast-to-coast rail service from Delano, CA and Wallula, WA to Rotterdam, NY. By loading and unloading freight in temperature-controlled distribution centers, their state-of-the-art offering goes beyond current intermodal capabilities, providing point-to-point service that constantly keeps the cold chain intact.

The Railex wine program is utilized with many of the wine-producing vineyards, bottling facilities and warehouses in California, Oregon and Washington State, says Steve Poindexter, director of business trade development. Since deliveries go to every major receiver in the northeast and eastern Canada, Railex also makes its cost effective, expedited solutions available to beer shippers.

The freshness of products sent using the Railex platform will be apparent to consumers, says Poindexter. “The difference in a wine product shipped in a temperature controlled environment versus shipped in dry trucks where temperatures can reach 100-plus degrees are dramatic.”

Railex’s versatility enables it to offer mixed-load capabilities to a variety of shippers. Its service integrates separate temperature-zoned cars that can accommodate a variety of products.

Poindexter also points to the benefits their customers enjoy, including cost saving of 12 to 18 percent in comparison to over-the-road pricing. “With our model, there is considerably less trauma to the product, carbon and fossil fuels are reduced between 45 and 55 percent, there’s reduced traffic congestion, along with roadway wear and tear.”

California produce is also making the 3,300 cross-country trip via intermodal rail service provided by Union Pacific. These perishable commodities are packed into refrigerated boxcars equipped with GPS technology, which protects products by keeping temperatures within a two-degree variance until the train arrives in Schenectady, NY, 128 hours later.

When Union Pacific started weekly high-speed, refrigerated intermodal rail delivery of California fruits and vegetables, it was more than an example of its reliability. The shipments also marked a milestone in the century-long evolution of the company’s service. It was the first time that they carried produce—which included peppers, grapes and celery —in rail cars since the interstate highway system was built.

These intermodal produce deliveries are also models of efficiency. Union Pacific estimates that it would take more than 200 long-haul trucks to match the freight capabilities of its 55-car train. A single rail shipment also conserves approximately 100,000 fewer gallons of diesel fuel and, according to EPA estimates, reduces CO2 emissions by 85,000 metric tons a year.

Don’t assume that intermodal is out of reach for smaller enterprises. While large-volume customers have relied upon Union Pacific’s intermodal services for 10 or 20 years, the company also aids shippers with less complex supply chains to select services to help them efficiently deliver their products. This can include coordinating ramp-to-ramp or door-to-door service for customers without direct rail access.

A closer look at shipping cycles is also part of the process of deciding if your shipments would benefit from intermodal. “First, identify your traffic lanes with consistent volume,” says Mnichowski.  “Next, determine if your freight can move in five-day service schedules, then consult with an intermodal expert to determine what goods ship well with intermodal.”

Increased reliance upon rail and the rapid growth of intermodal could mean good things for the environment. Here’s why:

Middle America: A Logistics Gold Mine