At least four ports in Florida, Georgia and Texas have decided to foot the bill to deepen federal waterways, a total of almost half a billion dollars, rather than wait years for funds. 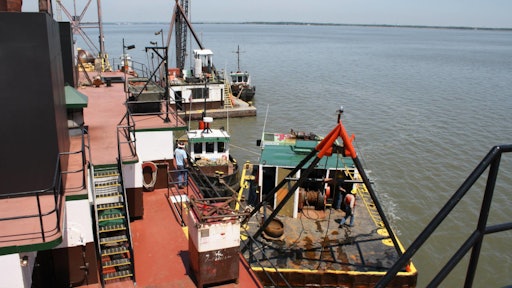 This project involves dredging as needed within the existing 40-foot Delaware River federal navigation channel to deepen it to 45 feet from Philadelphia Harbor, Pa. and Beckett Street Terminal, Camden, N.J. along a 102.5-mile distance to deep water in the Delaware Bay.

Tired of waiting for Congress, states racing to deepen seaports before the opening of the enlarged Panama Canal next year are picking up the cost of what has traditionally been a federal duty, according to Bloomberg.

With funding for coastal navigation channels at its lowest in a decade, port directors worry that the federal government is abandoning construction and maintenance of U.S. waterways just as builders churn out a new generation of massive container vessels. The so-called post-Panamax class carries loads twice the size of current ships and demand ever-deeper harbors.

At least four ports in Florida, Georgia and Texas have decided to foot the bill to deepen federal waterways, a total of almost half a billion dollars, rather than wait years for funds. To berth post-Panamax ships, ports typically need 50 feet of depth – there are only four on the U.S. East Coast. Smaller facilities are looking for an edge to gain a bigger piece of the $4.6 trillion in economic activity generated at U.S. ports last year, a quarter of the gross domestic product.

“Efficiency’s the name of the game,” said John E. Walsh, chief executive officer of the Canaveral Port Authority in Cape Canaveral, Fla., which is funding a deepening project with state and local money. “You will either be a port that can be a stop or you’re not.”