An analysis of outbound activity by region shows how local influences set trends in the spot truckload market. 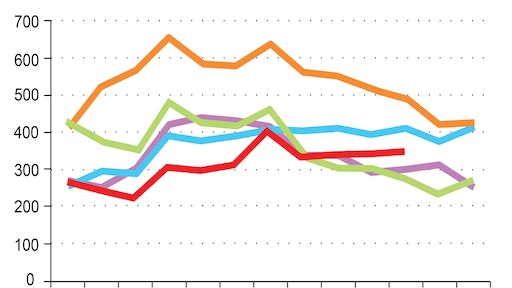 If you look just at national average rates and volumes on the spot (non-contract) truckload market, it’s easy to lose sight of the details—the local influences that really set the trends. So lately, I’ve been looking at outbound activity by region, trying to understand what’s behind some notable strong volumes this fall.

Measured at the national level for trips over 250 miles, spot market van rates are up 17 cents per mile since the low point in April, including a 6-cent increase in the fuel surcharge.

I analyzed outbound rate activity in 15 regions, in fact, comparing average spot truckload rates for the first seven days of November to rates for the entire third quarter. In the first week of November, 64 of those region-to-region pairs had a rate increase of at least 6 cents per mile. Why?

First, there’s more freight to haul. Spot van freight volume usually peaks in June and gradually declines during the rest of the year.

Second, there’s higher-than-normal demand to move that freight from West to East. In my 15-region analysis, the biggest rate increases were on lanes that originated in the West, heading to destinations along the East Coast.

Here are the four region-to-region pairs with the biggest rate increases:

• Pacific Northwest to Florida and southern Georgia—up 16 cents per mile.

In some regions, including the Great Lakes and upper Midwest, rates were actually down 6 cents per mile or more in the first week of November. But surging activity out of California, the Pacific Northwest and mountain regions elevated the national average.

Again, you have to ask why. Here are a few factors that are contributing to higher rates to move goods by truck:

Rate changes for refrigerated freight on the spot truckload market are spurred by produce harvests. The national average refrigerated truckload rate rose to $1.97 a mile during the first week of November, the highest since early July.

The bankruptcy of Hanjin Shipping Co. continues to send ripples through the supply chain. It may not affect your regular contract hauls, but what if your freight was held up at the port and wasn’t available for the carrier’s scheduled pickup? You reschedule, and then the carrier or the 3PL might need to hire a spot-market truck to move it. Guess what? That rate just went up.

While the geographic trends may shift in the coming weeks, it’s reasonable to expect a continuation of the atypically high volume and rates on the spot freight market through the end of the year.