Access to a world-class multi-modal infrastructure and a generous state economic development program are just a few tasty incentives. 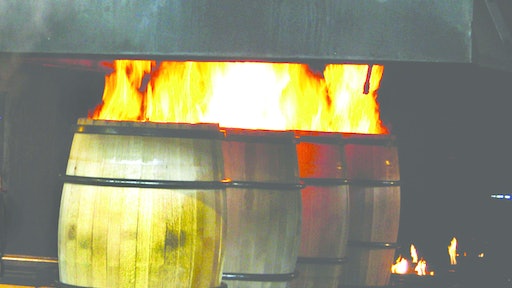 Once a year, adrenaline pumping, hoof stomping, pure American entertaining horse racing takes place at Churchill Downs in Louisville, Ky. Within what takes place in just over two minutes, the culmination of generations of selective breeding, training and culture, is the Kentucky Derby, the pride of the Commonwealth of Kentucky.

With its lush bluegrass pastures and horses that are almost celebritized, Kentucky has a lot to be proud of. It is home to America’s only native spirit, bourbon whiskey—a $3 billion per year global industry—along with a thriving agricultural mecca and a world-class domestic and international transportation and distribution hub.

The initial attraction to what was to be Kentucky, in early settler days, was its rich unusually fertile land. Geologically, over 50 percent of Kentucky rests on limestone rock. It is said that horse breeding in Kentucky has been optimal, because the horses’ bones are stronger and healthier due to feeding on grass that is nourished by the high calcium rich mineral content in the soil. Interestingly, the limestone is what also creates the mineral rich soil that is perfect for growing bluegrass, thus the nickname, “The Bluegrass State.”

The mineral rich limestone also makes Kentucky bourbon special, a la its terroir. Purists in the bourbon industry claim that bourbon isn’t bourbon unless it’s made with iron-free limestone water. The limestone removes the iron that can give liquor a bad taste and adds good minerals that create the unique and distinctive flavors of bourbon. Some bourbon distillers even specify that the barrels must be made from oak trees grown on a limestone shelf.

Logistics is a key attraction

Logistically speaking, Kentucky has long been an important transportation and distribution hub in America. Kentucky is old school America, with its roots steeped in Civil War history. It was a “neutral” state geographically situated right between the North and South, connecting the two. At that time, tobacco, flour, snuff and whiskey made up Kentucky’s economy. The Ohio and Mississippi rivers were used to transport goods to the South and the rail system was used to transport goods to the North.

Today, Kentucky remains a key logistics hub for the U.S. interior. With its central location, Kentucky offers domestic and international businesses access to a 34-state distribution zone containing two-thirds of the U.S. population and reachable within a one-hour flight or one-day drive (600 miles).

The food and beverage sector is taking notice. Businesses in this sector are relocating or expanding operations to Kentucky, while others have been there for years. A sampling of companies includes Yum! Brands, Inc. (the parent of Kentucky Fried Chicken, Pizza Hut and Taco Bell), The Schwan Food Co., Tyson, Papa John’s Pizza, Nestle, A&W, ConAgra Foods, Kellogg’s, J.M. Smucker Co., Sara Lee Foodservice, Pepsi Cola, Coca-Cola, along with bourbon makers, Jim Beam, Maker’s Mark, Buffalo Trace, Wild Turkey, Four Roses, Wilderness Trace, and Brown-Forman Corp., whose portfolio of spirits includes the first distilled bourbon whiskey (Old Forrester) as well as Woodford Reserve and Jack Daniel’s, to name a few. Brown-Forman is also one of the world’s largest producers of whiskey barrels—making over 600,000 barrels annually at its own cooperage in Louisville, with roughly 85 percent of those barrels used for Jack Daniel’s Whiskey.

So why Kentucky? Kentucky gives the food and beverage industry agricultural support for the raw materials it needs, including corn, soybeans, wheat, dairy farms, egg hatcheries, goats and beef cattle. There are more than 85,500 farms and almost 14 million acres of dedicated thriving farmland. Once the raw goods are cultivated and turned into products, the numerous container and packaging plants, as well as refrigerated warehousing operations, are set to take over.

Transportation infrastructure is another incentive for investing in Kentucky. Businesses have access to 19 interstate highways, plus controlled-access parkways, and 2,760 rail miles served by three Class I railroads — CSX, Canadian National (CN) and Norfolk Southern (NS) — and other regional railroads. The Ohio and Mississippi rivers, along with seven public river ports create an easy barge thoroughfare along 1,100 miles of navigable waterways. Ongoing investments in intermodal freight facilities are also supporting the transportation of goods.

One company taking advantage of the air cargo capabilities is Louisville, Ky.-based Clearwater Fine Foods (USA) Inc. The Louisville location serves as a lobster holding facility for fresh lobster caught by Clearwater Fine Foods in Nova Scotia. The company came to Louisville in 1999, when UPS opened its UPS Worldport facility at SDF. Clearwater specializes in live lobster, an extremely delicate and perishable product. At their Louisville facility, the company created an ocean environment that closely replicates both the temperature and salinity that lobster requires to stay healthy.

“There’s a lot of process that we go through to make sure that we have the best lobster for our customers. We go above and beyond,” says Paul Valdez, operations manager. Clearwater can ship a lobster within the same day if needed. The company uses several air carriers, including UPS. Every day at 5 p.m., UPS arrives to pick up that day’s lobster shipments, which are then transported to a special dedicated holding section. In order to reduce stress on the lobster, movement is kept to a minimum, and transport on conveyor belts are avoided.

UPS Worldport was created from a smaller UPS sort facility. It now ranks as the largest fully automated package handling facility in the world. On an average day the facility turns 130 cargo aircraft and processes 1.6 million packages. Currently, 416,000 packages move every hour, but the goal is to boost that figure to half a million.

With assistance from the state government, five different state organizations are working together to create a highly trained and skilled workforce to support Kentucky’s businesses.

“The workforce is diverse, demographically. You have many Ph.D.’s and folks with Masters degrees, and you have Kentuckians with high school educations,” notes Joe Lilly, executive director of the Kentucky Cabinet for Economic Development. The Kentucky Skills Network was created for businesses that need help getting special or specific training for their workers. Worker productivity in Kentucky is rated “above average,” which is also attractive to business.

In the meantime, Kentucky Gov. Steven L. Beshear is an active and driving force in overhauling Kentucky’s tax code. His goal is to make Kentucky one of the most competitive states in the U.S.

The Kentucky Cabinet for Economic Development (www.thinkkentucky.com) has developed the Office of Entrepreneurship specifically to help aid business development, either starting from the “idea” stage or assisting a fully developed business that needs help making connections or gaining access to the right resources. In addition, the Kentucky Economic Development Finance Authority (KEDFA) was set up to provide financial assistance and tax credit programs for businesses.

One company that used KEDFA’s resources is ZoomEssence, Inc., a food technology company. The company’s DriZoom technology delivers liquid quality flavors and ingredients in a powder form, without the use of heat. ZoomEssence tapped into the state’s tax incentives, guidance and investment options to expand its operations in Kentucky. KEDFA provided the company with investment funds of up to $175,000, and $300,000 in tax incentives to be used over a 10-year period.

A complete list of Kentucky Business incentives is available online at www.thinkkentucky.com/kyedc/pdfs/kybusinc.pdf.

The state ranks high on other key considerations for businesses. Kentuckians are known for their strong work ethic and their ‘can do’ spirit. It also boasts the fourth lowest industrial electricity rates in the nation. The cost of living in Kentucky is also one of the lowest in the nation. Housing is 30 percent lower than the national average. There are eight public universities, 20 independent higher learning institutions and 16 community and technical colleges.

Kentucky is attractive to business—and the people who live there. The state is a hybrid of sorts—it’s located in the Midwest but definitely has a southern flare. Imagine a gentle Kentucky rain, bluegrass pastures, bluegrass music playing in the background, relaxing on your porch, holding a snifter of good ol’ Kentucky bourbon—yes, this is a fine place to call home.

Cynthia Y. McCann is a Los Angeles-based photojournalist, whose work has appeared in several B2B supply chain journals, including World Trade WT100 and Food Logistics. Her artwork was recognized on the front page of The Los Angeles Times as part of the newspaper’s coverage of the Surfin’ Hermosa art exhibit in 2004.

Shippers that fail to digitize their transportation sourcing and management simply won’t keep up in the world of today, and more importantly, in the fast-approaching world of tomorrow.
3GTMS
August 18, 2021
Follow Us