The world's largest retailer is playing catch up with Amazon.com Inc. on distribution and technology, and acquiring Jet.com could give Wal-Mart access to their innovative pricing software, its network of warehouses and customer data. 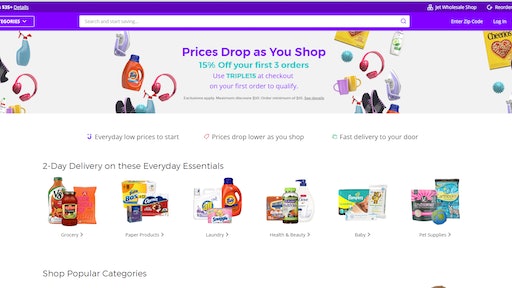 Wal-Mart disclosed a total of $3.1 billion for e-commerce and digital projects, such as its platform and new warehouses, in the four fiscal years to January 2017.

Wal-Mart Stores Inc is in talks to buy Jet.com, a year-old online rival, as part of a multibillion-dollar revamp of its e-commerce division aimed at boosting online sales growth, reported Reuters, which cited a Wall Street Journal report.

The world's largest retailer is playing catch up with Amazon.com Inc. on distribution and technology. The acquisition could give it access to Jet.com's innovative pricing software, its network of warehouses and customer data.

Wal-Mart disclosed a total of $3.1 billion for e-commerce and digital projects, such as its platform and new warehouses, in the four fiscal years to January 2017.

Wal-Mart acquired a majority stake in Chinese e-commerce firm Yihaodian in 2012 but sold it in June to JD.com Inc, which is China's second-largest e-commerce company.

Editor's Insight: This development reflects the degree to which e-commerce has disrupted traditional retail. Wal-Mart is reportedly prepared to pay more than $3 billion for a company that is just over one year old that has developed a unique e-commerce software that can offer a lower price based on order size and proximity of merchandise to customer.

Wal-Mart has also pledged $2 billion to strengthen its e-commerce sales and has acknowledged that e-commerce has sucked the wind out of its growth. The company has invested in new fulfillment centers and has rolled out a two-day free shipping service.