Greece Decides To Sell Port Of Piraeus To Chinese Firm 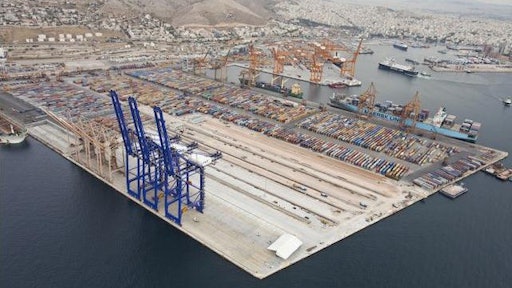 As Greece races to raise funds, Deputy Prime Minister Yannis Dragasakis told China's official Xinhua news agency that Athens will sell its majority stake in the port of Piraeus within weeks, a flip-flop from its previous position, according to The Maritime Executive.

Speaking during a visit by Greek officials to China, Dragasakis hinted that Chinese firm Cosco Group – short-listed in a process launched by the previous center-right government – was a front runner for the state's 67 percent stake.

And as Greece seeks to fill its state coffers, the Russian ambassador to Athens told Kathimerini newspaper that Moscow would examine any loan request from Greece, were it to be made.

Greek Prime Minister Alexis Tsipras is due to visit Moscow on April 8 for talks with Russian President Vladimir Putin, but the Greek government has stressed it is not seeking funding from the Kremlin.

On Saturday, Greece's energy ministry said Lafazanis will meet Russian Energy Minister Alexander Novak and Gazprom Chief Executive Alexei Miller on Monday in the capital, a week before Tsipras is due to arrive.

China Investing in Ports in Pakistan