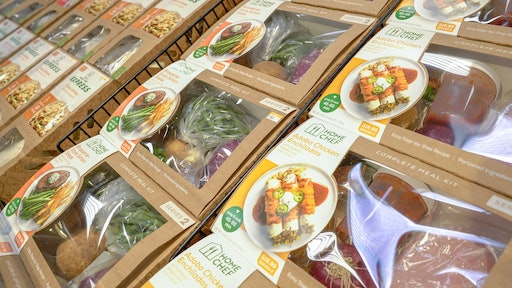 During the past three months of the COVID-19 pandemic, online grocery orders and meal kit deliveries have experienced record growth, increasing the need for companies to accurately measure and demonstrate the safety of their perishable food products. A new digital labeling technology from Varcode enables grocers and meal kit suppliers to track food temperatures throughout the cold chain, while ensuring compliance, increasing product sustainability and reducing costly waste.

Online grocery sales grew to $5.3 billion in sales in April, compared to $4 billion in March, and industry analysts predict the industry will easily grow by 100 percent this year. Similarly, consumers spent around $100 million on meal kit deliveries in April, nearly double the sales of the same period last year.

“Fifty four percent of consumers who have not ordered food online cite concerns about temperature freshness.  Additionally, 27 percent of consumers say they’ve had temperature problems with food deliveries, and eight percent say they or someone they know has become sick from eating perishables with temperature problems,” says Joseph Battoe, president and CEO of Varcode. “A primary concern for grocers and meal kit companies is sustaining the current growth pattern, and a major factor in that effort is their ability to ensure product safety and build customer confidence.”

Varcode’s solution relies on digital “smart barcode” tags applied to each perishable food bag or box, which dynamically change based on customized time and temperature parameters. The labels use a combination of precisely tuned chemicals and a uniquely printed layer to capture temperature variances when and where they occur and create a permanent, irreversible digital record accessed by Varcode’s proprietary smartphone app. Varcode’s digital records are cloud based and accessible by grocers and meal delivery companies from the point of processing through customer delivery.

“We’ve built exacting digital data, real-time insights and the convenience of mobile technology into a single smart label attached to each perishable product delivery,” Battoe says. “We’re enabling grocers and meal kit companies to verify their products are fresh and wholesome upon arrival at the consumer’s home.”

“Technology that accelerates public health safety for food delivery will encourage more people to avail themselves of grocery delivery during a time when it is literally essential to saving lives. The ability to verify freshness when transporting perishable food items at every juncture forever changes the face of food safety and enables grocers and food delivery platforms to underscore they care about consumers’ well-being,” Domenic J. Veneziano,  former director of import operations, and supervisory consumer safety officer for the Food & Drug Administration, says.

“Every year, American consumers, businesses, and farms spends $218 billion a year, or 1.3 percent of GDP, growing, processing, transporting, and disposing food that is never eaten,” he said. “That’s 52 million tons of food sent to landfill annually, plus another 10 million tons that is discarded or left unharvested on farms. Meanwhile, one in seven Americans is food insecure.”

Join e2open and KPMG in a webinar as they share how leading companies optimize complex production and allocation decisions amid ongoing material and component shortages.
August 31, 2022

Join e2open and KPMG in a webinar as they share how leading companies optimize complex production and allocation decisions amid ongoing material and component shortages.
August 31, 2022
Follow Us