The newly formed alliance provides a platform for growing trilateral cooperation to foster trade, innovation and investment opportunities between the public and private sectors of the three regions. 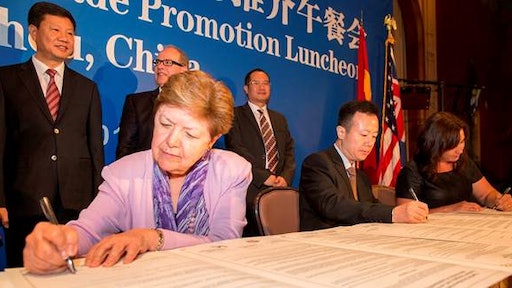 The Port of Los Angeles has signed a memorandum of understanding with the Ports of Auckland, New Zealand, and Guangzhou, China, at a Tripartite Ports Summit sponsored by Los Angeles Mayor Eric Garcetti and the City of Los Angeles. The document establishes the Tripartite Ports Alliance, which represents a new level of cooperation between the three port authorities that had initially committed to working more closely together in November 2014.

“We commend Mayor Garcetti’s leadership and foresight in helping to form this alliance during his trade mission to Asia last year,” said Ambassador Vilma Martinez, Los Angeles Harbor Commission president. “The Port of Los Angeles looks forward to collaborating with the ports of Auckland and Guangzhou on a series of initiatives, including promoting commercial and business opportunities as well as sharing innovative best practices.”

Los Angeles, Guangzhou and Auckland are sister cities and strategic trading partners that share similar economic goals. The newly formed alliance provides a platform for growing trilateral cooperation to foster trade, innovation and investment opportunities between the public and private sectors of the three regions.

Objectives within the memorandum of understanding include sharing of best practices and expertise; strengthened communication and collaboration on investments, technologies and environmental policies; and working together to enhance capabilities of each port in order to boost their respective regional economies.

The 2-day Tripartite Summit is focused on business-to-business matchmaking for key sectors, including transportation, infrastructure development and design, retail and consumer products, biomedical technology, among other sectors. Mayor Chen Jianhua of Guangzhou and Mayor Len Brown of Auckland have brought leading high-level government and business delegations to the event. The summit is the first of three to be held under the Alliance.

The Port of Los Angeles is America’s premier port and has a strong commitment to developing innovative strategic and sustainable operations that benefit Southern California’s economy and quality of life. As North America’s leading seaport in terms by container volume and cargo value, the Port of Los Angeles facilitated $290 billion in trade during 2014. Port operations and commerce facilitate more than 148,000 jobs (about one in 12) in the City of Los Angeles and 531,000 jobs (or one in 16) in the five-county Southern California region. The San Pedro Bay Ports support more than 1 million California jobs and 3.1 million nationwide.