Designing A Distribution Center For Growth 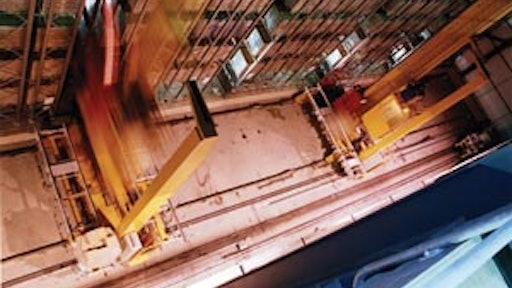 When Dairy Crest, the United King-dom's leading dairy, decided it was time to consolidate distribution from 14 manufacturing facilities into one national distribution center, it teamed up with Dematic to produce a state-of-the-art facility that could accommodate aggressive growth.

The move to a central facility was inspired in large part by a shift in the way customers placed their orders. Starting in the late 1990s, a lot of Dairy Crest's customers moved to "day-one for day-two" distribution, where they order products every day for next-day delivery to their DCs. That's the way the whole industry in the chilled dairy and chilled food market works within the U.K. now.

Dairy Crest was having a hard time accommodating that kind of a delivery system. A lot of its products, which include milk, butter, spreads, cheeses, yogurts and ice cream, historically, were on longer lead times, going direct from the factory to the retailer.

"When we first started looking at building a central DC, we also had to factor in the company's plans for market growth, both in terms of increasing existing product sales and in terms of brand acquisitions," says Andrew Watson, distribution director for Dairy Crest. "The DC had to be capable of handling tremendous growth in product volumes."

Dairy Crest selected Dematic Corp. (formally Siemens Logistics & Assembly Systems), Grand Rapid, MI, to design and build the central DC. It initially had a very cohesive idea of what capabilities it wanted in the facility, including storage requirements and the number of pallets an hour to move throughout the facility.

After a thorough analysis of Dairy Crest's needs, Dematic came back with a broader material handling solution that included automation in the picking process and a state-of-the-art warehouse management package.

It also included a multi-level mezzanine structure that added a second picking level, an integrated monorail system to move pallets through the many stages of production and distribution, and a sophisticated warehouse management system (WMS).

"Dematic designed a total site-wide solution for Dairy Crest," says David Jefferys, who headed up the project for Dematic's U.K. offices. "Before designs were finalized, we developed computer-simulated models for Dairy Crest of our proposed system undergoing accelerated production levels. We wanted to know how the system would perform well into the future with increased production loads. Every MHE system detail, from receipt of the product into their DC to shipping out to the retailer, was thoroughly simulated before the design was accepted."

The company opened its 240,000-square-foot central distribution center in Nuneaton, England, about 100 miles northwest of London, in 2000. Since that time, it has acquired four companies and/or brands, and the DC has easily assimilated this volume. The company currently dispatches 250,000 cases daily, and maintains more than 12,000 pallets of finished goods in storage.

The DC also houses a cheese maturation area, where raw cheese that comes in blocks is held for up to a year in a temperature-controlled storage area that can accommodate up to 35,000 pallet positions. The cheese maturation store is structured with free-style, high-rise racking 30 meters standing on 50,000 square feet of floor space.

This seven-aisle facility is served by two storage and retrieval cranes, which can transfer between aisles via two mobile transfer bridges running across the front of the racking. The cheese can be retrieved and transferred to an output conveyor spur via a shuttle car, ready for dispatch to Dairy Crest's cheese cutting and packaging facility.

The monorail, a single-track Dematic DSB system with 28 suspended pallet carriers, is the heart of the pallet transport system. It can carry 200 inbound pallets and 230 outbound pallets an hour and is supplemented with five lifts for moving pallets between levels in the building as well.

"The system runs smoothly," Jeffreys says. "Incoming pallets are transferred from trailers to infeeds on automated receiving conveyors via ride-on powered pallet trucks. The pallet identity is verified against information held in the warehouse management system (WMS). Pallets are moved to one of the two fully-automated high-bay warehouses via the monorail. The monorail enables load stability to be maintained, due to the gentle nature by which the pallet is handled."

"The finished goods store offers over 12,000 pallet storage locations, spread across five aisles, each of which is served by a high capacity, double-pallet handling storage and retrieval crane," Jeffreys says. "Typically, goods remain here for no more than a few days before being transferred via the monorail to the picking hall."

Five storage and retrieval cranes replenish the picking aisles automatically. Order pickers are guided by radio data terminals (RDT's) to product-pick locations, while traveling around the area on ride-on pallet trucks. When picking is complete, the pallet is fed into an automatic in-line shrink wrapper, and then through an automatic shipping label applicator, before being transferred to the dispatch area via monorail or powered pallet truck.

Siemens also implemented a WMS application tailored precisely to the requirements of Dairy Crest. Product coming in is tracked with EAN-128 pallet labels. As soon as each pallet is received and scanned, it associates with a prior electronic-received purchase order.

The WMS also integrates with Dairy Crest's sales order processing IT platform, creating a seamless path from the customer through to the dispatch of picked goods.

Yard management is also encompassed by the WMS, with the movement of trailers monitored and controlled with the help of two dedicated shunting vehicles equipped with on-board RTD's.

"We greatly benefited from putting all of our activities together," Watson adds. "Our customers are now happier. By moving our stock control next to our transport, we can now run efficient transport out of the distribution center, whereas before our distribution vehicles might have only been 60 percent to 70 percent full.

"We have moved the distribution point closer to some of our factories, and all of our stock is now in one building and on one system. This has proved a worthwhile investment for Dairy Crest," he concludes

Order fulfillment is up to 99.9 percent. Stock turnaround decreased from 24 hours to 14 minutes. Accurate fulfillment of incoming orders within tight deadlines is consistently achieved, Product dispatch happens within six hours of receiving an order.