National average rates for van, refrigerated, and flatbed trucking entered the month of August near their high marks for the year. 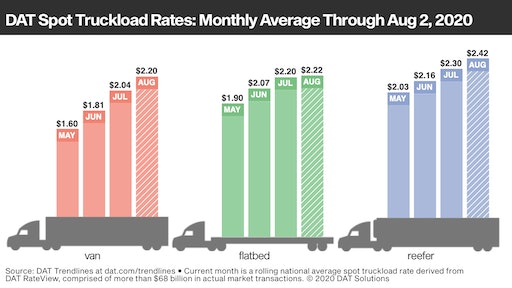 National average rates for van, refrigerated, and flatbed trucking entered the month of August near their high marks for the year, said DAT Solutions, which operates the industry’s largest load board network.

Supply chain disruptions caused by COVID-19 pushed more freight to the spot market at a time when demand for truckload capacity usually declines.

Shippers and freight brokers posted 8.6% more loads during the week ending August 2 while the number of truck posts fell 8.0%.

Load-to-truck ratios increased for all three equipment types week over week, with the van ratio at 5.2 after averaging 4.4 in July. The average reefer ratio last week was 9.0—the highest point in two years—while the flatbed ratio was 30.6, well ahead of 2019. Load-to-truck ratios measure the number of available loads relative to the number of available trucks on the DAT One load board network.

The average spot van rate last month was 10.6% higher compared to July 2019. Van and reefer rates entered August much higher than their July averages at $2.20 a mile for vans and $2.42 for reefers.

Reefer demand is higher in Philadelphia, Elizabeth, N.J., and other northeast port markets that handle imported fruits and vegetables. Elizabeth to Lakeland, Fla., rose 10 cents to an average of $2.04 a mile last week.