After Weeks of Volatility, Spot Rates Settle in Above Pre-shutdown Levels

National average van, refrigerated, and flatbed rates recovered to where they were prior to widespread shutdowns of the U.S. economy in March as the number of posted loads increased 18% during the week ending June 7. 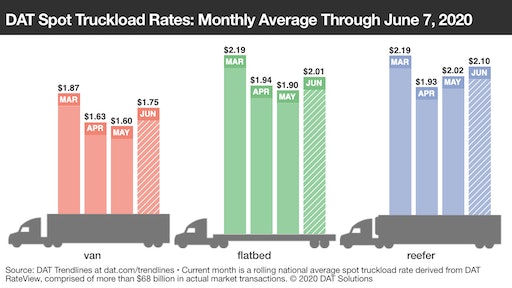 National average van, refrigerated, and flatbed rates recovered to where they were prior to widespread shutdowns of the U.S. economy in March as the number of posted loads increased 18% during the week ending June 7.

Truck postings rebounded 13% compared to the previous week, a sign that capacity is shifting to the spot market to take advantage of more abundant freight.

Volumes up 28% on high-traffic lanes: Spot rates were higher on 72 of DAT’s top 100 van lanes by volume compared to the previous week as the number of loads moved on those 100 lanes was up by an average of 28%. The national average van load-to-truck ratio dipped from 2.8 to 2.7, however, as more capacity arrived on the spot market.

Produce shifts north: The national average reefer load-to-truck ratio was 3.9 last week, compared to 3.7 the previous week. Rates increased on 40 of the top 72 reefer lanes by volume on a 3% decline in the number of loads moved. Warmer weather is driving demand for refrigerated trailers in the Great Lakes region: Grand Rapids, Mich., to Philadelphia, rose 25 cents to an average of $2.86 per mile compared to the previous week. Outbound rates from Chicago averaged $2.18 a mile, up 12 cents week over week.

Florida falling: Among the 16 reefer lanes where rates declined last week, the top seven originated in Miami or Lakeland, Fla. The biggest drop was from Lakeland to Baltimore, down fell 17 cents to $2.03 compared to the previous week. Miami to Atlanta paid 16 cents less at $1.52 per mile.

Ratio hits a high point: Flatbed carriers have endured additional volatility in energy, construction, manufacturing, and other industrial markets that use their services. Spot rates are still well below last year’s levels when the national average for June was $2.30 a mile. However, load volumes increased 2.2% on DAT’s top 78 flatbed lanes and the national average flatbed load-to-truck ratio poked above 21 last week. That’s better than the year-ago average of 20 loads per truck, the high-water mark for 2019.

Houston holds steady: Load volume from Houston, by far the country’s busiest flatbed freight market, was up 2.6% compared to the previous week although the average outbound rate gave up a penny to $1.95 a mile.