Kenworth and Veritable Vegetables aim to continue to deliver food safely during the coronavirus pandemic. 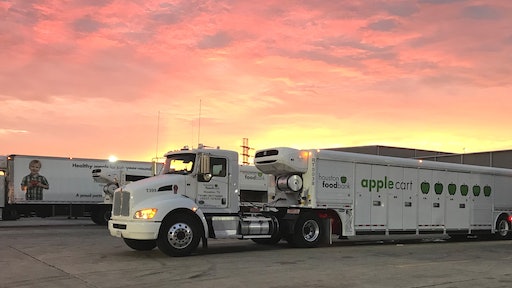 When San Francisco became one of the first cities in America to implement “Shelter in Place,” business changed for Veritable Vegetable. Gone were many of its corporate customers – restaurants, caterers, corporate campuses and schools, but the demand from its grocery store customers increased. “It was like Thanksgiving,” said Chris Adams, Veritable Vegetable’s director of transportation. “Everyone was flocking to grocery stores and we had to shift our efforts to meet that need. It was a tremendous initial spike.”

The Bay Area company operates a fleet of 20 Kenworth long haul trucks – mostly T680s, and has seven T270 and T370 hybrids, all purchased through NorCal Kenworth. In addition to local deliveries, the company delivers down to the Mexican border, and into Nevada, Arizona, New Mexico and Colorado.

“The shift in business meant we had an opportunity to consolidate loads and be more efficient,” said Adams. “That’s been one positive.”

Once a long-haul delivery is made, the drivers are routed to a farm or warehouse for a backhaul and return to Veritable Vegetable’s distribution center with organic fruit, vegetables, and other perishable food. From there, food is sorted and palletized for shipments to independent grocery stores and other customers. “It’s been somewhat of a challenge with the backhauls,” said Adams. “Some locations are short staffed, so it takes longer for loading. Plus, a few warehouses have been closed for deep cleaning.”

According to Adams, Veritable Vegetable drivers have been nothing short of remarkable.

“They know their work is providing an essential service to the communities we service, which includes the farmers we support,” she said. “The health and safety of our drivers is our top priority. We’ve provided them with more robust sanitation training, and equipped the trucks with cleaning caddies that include disinfectant, hand sanitizer, masks and gloves. We adjusted delivery protocols to eliminate signatures while reducing contact. We’re also installing microwaves in our Kenworth T680 sleeper trucks, so drivers can cook onboard. Upon return from a run, we sanitize the cab so it’s ready to go the next morning.”

While Adams said business is operating close to normal, she is heartened by how the public has responded to truckers. “I made a delivery myself to Truckee (a mountain town in California). When I unloaded a pallet of vegetables, customers at the store stopped and applauded. That was something I won’t forget. We’ve been seeing an outpouring of support for what we do. We’re all in this together.”

In Arkansas, trucking companies have charged ahead to keep retail stores stocked with needed food and supplies. As a full-service refrigerated carrier, KARR Transportation in Mountain Home, Arkansas, delivers fresh produce and frozen foods from farmers and producers to distributors throughout all 48 states. To meet increased demand on its own side of the country, the company’s fleet of 51 trucks, mostly Kenworth T680s purchased from MHC Kenworth – Nashville, has focused on routes in the Midwest and Southeast. Because drivers are not getting their usual miles, KARR is subsidizing them with guaranteed pay.

“It's been a roller coaster ride because of rapidly changing orders,” said Al Beers, KARR Transportation president and CEO.

The majority of runs can be handled in a normal day. But that's not all on the road. According to Beers, even with scheduled pickups and deliveries, drivers have been forced to wait up to 14 hours on either end because of staffing issues at warehouses. Many shippers and receivers are requiring drivers to stay in their trucks, and are no longer personally signing waybills as a way to limit cross-contamination. Instead, they're collecting signatures electronically — a move Beers hopes will become the “new normal” to improve efficiency.

Having its Kenworth T680s equipped with APUs and 76-inch sleepers is a blessing when wait times are long, said Beers. One of KARR's regular customers that produces ready-made salads and healthy snack trays for convenience stores keeps the drivers’ fridges stocked with food and drinks.

Even with no shelter in place orders in Arkansas, KARR Transportation locked down its Mountain Home facilities to ensure that the company was able to do its part. “We geared up and had everything in place to protect our drivers and office staff. We even put in a new phone system and internet apps so that we could work remotely and still sort of be ‘virtually’ in the same room,” said Beers. “Luckily, we haven’t had anyone get sick. It's easy to get run down when you're working long hours. So, we've been doing everything we can, making sure drivers wear protective gear, and even take vitamin supplements, to keep them as healthy as possible.”

According to Beers, “We're seeing a lot of appreciation for the drivers. Even President Trump brought the role of the transportation industry to the forefront, which is phenomenal, and I hope it stays that way,” he said. “I can't say enough about, not just my drivers, but all the drivers out there. They have really stepped up and shown their patriotism. We had a meeting with all of our drivers to get everybody's thoughts on the situation. The comment I heard most often was, ‘We're here to supply America.”

While the retail food segment has seen a huge change in demand, so have food banks. With much of the country still in shelter in place, the subsequent loss of jobs has been felt. Food banks have been racing to provide enough food for those in need.

The Houston Food Bank (member of Feeding America) serves 18 counties and demand has never been greater. “Last year we distributed 104 million meals, and we are on pace to exceed that,” said Jose Campuzano, who serves as director of logistics for the food bank. “Right now, we are distributing at 150 percent of our usual operation, and that means we’re delivering about 750,000 pounds of food each day. Before the current situation, food distributions at partner locations could see up to 250 families and now some partners are reporting to seeing double and triple the amount of families. Partners are also reporting serving people who have never sought food assistance before.”

Using a fleet of 39 Kenworths, mostly Kenworth T270s and T370s purchased through Performance Kenworth – Houston, the food bank changed to a hub-and-spoke operation after Hurricane Harvey. “That event changed out our logistics structure,” said Campuzano. “Today, we have 21 hubs for food collection, then distribute to 120 spokes. Those spokes are increasing though as we figure out new areas where we can distribute food. We’re looking at all options, including stadium parking lots. We just need to get food out to the people.”

According to Campuzano, the trucks typically average around 90,000 miles per month, “but we’re running more than 150,000 miles per month now to keep up with our distribution increasing. We also take CDC guidelines very seriously, maintaining our safe distances and wearing protective gear. Protecting ourselves and our volunteers is mandatory,” he said.

“What’s been priceless is the number of volunteers who have come forward. That’s always been the Houston spirit – neighbors getting involved to help neighbors. We’ve also have been informed that the National Guard will provide 200 soldiers to help with large-scale distributions, sorting and packing food, and warehouse duties. This will help immensely.”

Three-quarters of the food distributed are perishables – fruits and vegetables – with most of the remaining food being dry/canned and dairy products. It utilizes 25 refrigerated trailers. “Since we border Mexico, we’re getting donated fruit from that country, plus fruit and vegetables from Florida, and apples from Washington. Everyone is stepping up to donate, yet we still have needs and it’s why we put out the call for donations. Every dollar donated helps provide three meals.”