National average spot truckload rates were in line with seasonal expectations and load-to-truck ratios inched higher during the final week of February. 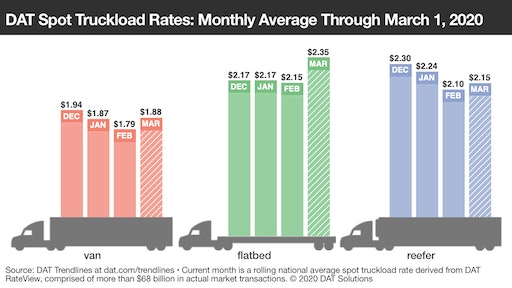 National average spot truckload rates were in line with seasonal expectations and load-to-truck ratios inched higher during the final week of February, said DAT Solutions, which operates the industry’s largest load board network. Stable rates and ratios at this time of year are signs that shippers are emerging from a typical mid-winter lull.

There were no specific indications that supply chain disruptions due to the COVID-19 outbreak affected spot truckload freight in a significant way during the week ending March 1. This may change in the coming weeks depending on import levels, how quickly Chinese ports can reduce their backlogs, and when those delayed sailings start to arrive here.

The national average van load-to-truck ratio increased from 1.9 to 2.1 last week, part of a five-week upward trend. Load-to-truck ratios were up in the Los Angeles market during February and ended the month at a high of 2.6 loads per truck for van equipment, although van capacity is plentiful and rates continue to be inconsistent.

The impact at West Coast ports and outbound lanes will be felt this month. The Port of Los Angeles said container volumes in February would drop 25% due to the economic impact of the coronavirus as well as lower imports in general, and container ship operators have canceled 40 sailings from Asia to Los Angeles in February and March.

Rates for open-deck equipment have ranged from $2.15 to $2.17 per mile as a national average since October.

One flatbed-market indicator to watch is the price of oil. High crude prices are a boon to trucking companies in markets like Texas because they spur demand for truckload capacity, which in turn leads to higher rates. Oil prices have fallen about 20 percent since late January to their lowest point since December 2018, near $50 a barrel, and forecasts are being lowered as the coronavirus outbreak cuts into travel and other activity in Asia.

Should the price of oil drop below the marginal cost of production here in the United States, estimated at $35 to $40 per barrel, producers may curtail drilling. This would reduce demand for domestic ground transportation, especially for flatbeds and rail intermodal equipment, in key markets like Houston, Dallas, and west Texas, leading to looser capacity and declining rates.

Adding Value to S&OP by Including the Front Lines