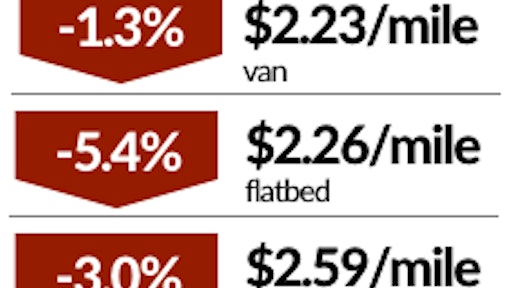 The number of truck posts increased 3 percent, which helped push dry van and refrigerated load-to-truck ratios down to near mid-December levels, before the mandate on electronic logging devices took effect:

Heading into what is traditionally a slow month, the number of van loads posted declined 16 percent and truck posts rose 4 percent. Van rates fell in nearly every major market, although prices are higher than they were a year ago. Chicago’s outbound average had the sharpest decline last week, down 16 cents to $2.77/mile after a 15-cent drop the previous week. Elsewhere:

Reefer load posts fell 19 percent and truck posts increased 2 percent. Prices remain high even though rates on most high-traffic lanes were down. Long-haul lanes from the southern border took big steps back, including McAllen, Texas-Elizabeth, NJ. (down 51 cents to $2.76/mile) and Nogales, Arizona, to Brooklyn (down 79 cents to $2.43/mile).

Rates are derived from DAT® RateView, which provides real-time reports on prevailing spot market and contract rates, as well as historical rate and capacity trends. For the latest spot market load availability and rate information, visit dat.com/industry-trends/trendlines and join the conversation on Twitter with @LoadBoards.