Developed by the refrigerant manufacturing industry to reduce environmental impact, R-452A has a global warming potential (GWP) that is almost half that of R 404A, the refrigerant used in most land-based transport refrigeration applications. 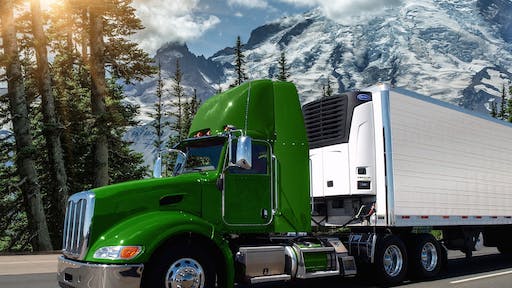 Developed by the refrigerant manufacturing industry to reduce environmental impact, R-452A has a global warming potential (GWP) that is almost half that of R 404A, the hydrofluorocarbon (HFC) refrigerant used in most land-based transport refrigeration applications. Carrier Transicold will offer the new refrigerant as an option to R-404A later this year.

“As a near drop-in substitute, R-452A offers similar levels of refrigeration performance, fuel efficiency, reliability and refrigerant charge in new equipment as R 404A, and we are pleased to be able to make it available to refrigerated transport operators seeking a lower GWP option to advance environmental sustainability,” said David Brondum, director, product management and sustainability, North America Truck, Trailer, Rail, Carrier Transicold.

R-452A is a refrigerant blend with a low-GWP hydrofluoroolefin (HFO) as one of its key components.

“Carrier Transicold has extensive experience with R-452A, having first offered it in 2015 to help Europe’s transport refrigeration industry respond to the European Union F Gas Regulation, which is driving down Europe’s use of traditional HFC refrigerants with higher GWPs,” Brondum explained. Extensive work has been done by Carrier Transicold in preparation for a similar transition in the United States.

Brondum noted that the EPA has not banned R-404A for transport refrigeration applications, enabling refrigerated haulers to choose the option best suited for their operations. This allows for considerations of price and availability, fleet size and maintenance budgets.

“Going forward, fleets may want to consult with their Carrier Transicold dealers to determine which refrigerant solution is appropriate,” Brondum said.

While Carrier Transicold will continue to offer R-404A, it will also provide R-452A as an option for new model Vector™ and X4 Series trailer refrigeration units, Supra® truck units and direct-drive truck units that currently use R 404A. The new refrigerant can also be used as a drop-in replacement for Carrier Transicold units already in service, although certain older models may require component retrofits or software updates, which can be accommodated through Carrier Transicold’s network of authorized dealers.

“Carrier Transicold’s larger goal of reducing the GWP of its transport refrigeration equipment goes well beyond the benefits of R-452A,” Brondum noted. “We are committed to pursuing the commercialization of HFC-free refrigerants in road transportation refrigeration by building upon our expertise with CO2 refrigerant, also known as R-744.”

For more information about R-452A for transport refrigeration applications, turn to the experts within Carrier Transicold’s North America dealer network.

For starters, industry experts predict food shortages, rising ingredients costs and an overall inflated cost of goods across the board.
Marina Mayer
May 4, 2022
Follow Us