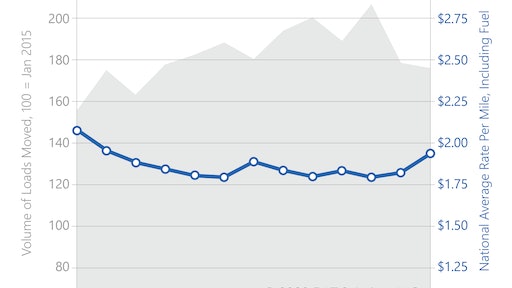 Rates rose to an 11-month high for dry van and refrigerated (“reefer”) equipment on the spot market in December, even though volume declined slightly for spot and contract truckload freight, according to the DAT Truckload Freight Volume Index.

Lower volumes rarely mean lower rates in the last month of the year. Spot rates have increased in December for the past five years, but the 2019 surge was stronger than usual, with van and reefer rates hitting their highest marks since January 2019.

“Our rate forecast indicates that van pricing should be flat in the first quarter of 2020 compared to Q4 2019, with upside potential of 3 to 5 percent,” said Ken Adamo, Chief of Analytics at DAT Solutions. “The forecasting model will respond in real time to any disruptions in the timing of weather events, trade tensions, and the spring shipping season.

“In the spring we expect year-over-year rate comparisons to turn positive for the first time since September 2018,” he added.

The year-end boost in rates was mostly the result of inventory management by e-commerce vendors, who prioritize delivery speed. While they don’t produce the same truckload volumes as the traditional brick-and-mortar retailers that still sell well over 80 percent of holiday merchandise, they do create more urgency on the spot market.

“E-commerce, with its unpredictable schedules, ties up a disproportionate share of truckload capacity throughout November and much of December,” Adamo explained. “Because e-commerce prioritizes delivery speed over efficient asset utilization, it adds extra pressure on spot market rates at the end of the year.”

Both van and reefer rates rose 12 cents per mile during the month. Van rates averaged $1.94, while reefers hit $2.30. Flatbed rates averaged $2.17 per mile in December, a 7-cent increase from November but the second-lowest monthly average for the year.