Spot Rates Dip During a Week Disrupted by Florence

Load-to-truck ratios and spot truckload rates moved lower during the week ending Sept. 15 as supply chains adjusted to the effects of Hurricane Florence and freight continued a seasonal decline. 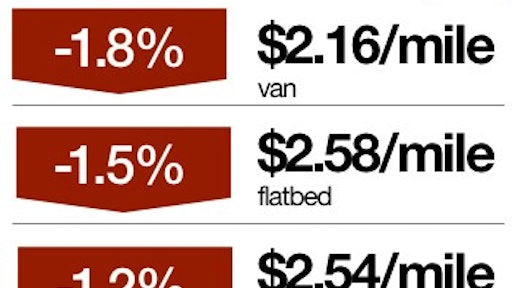 Load-to-truck ratios and spot truckload rates moved lower during the week ending Sept. 15 as supply chains adjusted to the effects of Hurricane Florence and freight continued a seasonal decline, said DAT Solutions, which operates the DAT network of load boards.

Van and reefer shipments into storm-impacted areas were heavy leading up to Friday, when Hurricane Florence made landfall, but flatbed shipments paused. Flatbed movements tend to pick up in the days following an emergency once it’s safe to move rebuilding materials and equipment. As a national average, the flatbed rate fell 4 cents to $2.58/mile.

VAN TRENDS: A 20 to 25 percent increase in load posts is typical in the week following a four-day workweek. As the Southeast braced for Florence, van load posts were up only 13 percent on DAT load boards. Truck posts increased 24 percent, which resulted in a national average of 6.6 loads per truck, a 9 percent decline.

However, overall volumes on the Top 100 van lanes hit a new high.

Before the storm hit, there were big spikes in van rates heading into the Carolinas and Virginia:

REEFER TRENDS: Reefer load posting activity was up 7 percent and truck posts rose 14 percent compared to the previous week, which included the Labor Day holiday; a 20 percent increase expected. That resulted in a 7 percent decline in the load-to-truck ratio, from 8.3 to 7.7 loads per truck.

For the latest spot market load availability and rate information, visit http://dat.com/trendlines and join the conversation on Twitter with @LoadBoards.