Powered by the flatbed market, April freight volume was still the strongest on record. 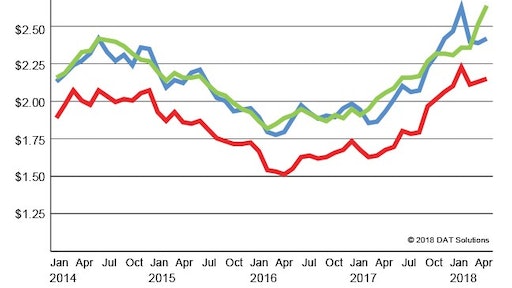 Spot truckload freight volume had the strongest April on record despite slipping 6.8 percent lower than what was reported in March, which is a common seasonal trend. Compared to the same month in 2017, freight availability rose 32 percent, according to the DAT North American Freight Index. Flatbeds contributed disproportionately to the volume increase, with a 59 percent boost compared to a year ago.

The Freight Index, a monthly measure of demand for spot market freight, is published by DAT Solutions, which operates North America’s largest load board marketplace.

Flatbed freight rates set another record in April, at $2.65 per mile, including fuel, a 12-cent increase over the previous record in March. Flatbed rates were a full 58 cents higher in April than in the previous year.

Van rates rose to $2.16 per mile, a 2-cent increase compared to March. Rates for refrigerated (reefer) cargo were up 3 cents to $2.43 per mile month over month. Rates gained 49 cents per mile for both trailer types, compared to April 2017.

Rates continued to rise sharply through the first week in May, as weather improved in the Northeast and Midwest and produce harvests added to pressure on truck capacity in the Southern band of states, especially Georgia and Florida.

“May and June are typically peak season for agriculture and construction, and retail freight appears to be expanding, as well,” DAT industry analyst Mark Montague says. “Seasonal demand should keep rates high at least through the end of the second quarter.”