The surge of freight during the last full week of July continued into the week ending Aug. 5, , as August had a stronger start than any month in more than a year and a half. 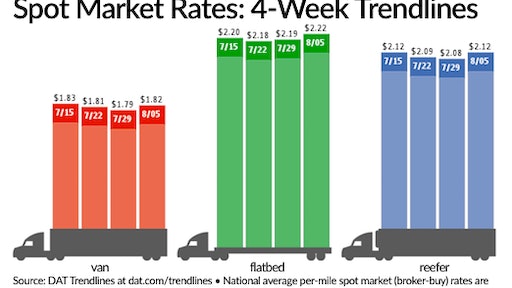 The surge of freight during the last full week of July continued into the week ending Aug. 5, said DAT Solutions, which operates the DAT network of load boards, as August had a stronger start than any month in more than a year and a half. The number of posted loads was nearly unchanged compared to the previous week, while available capacity fell 2.1 percent.

For van freight, load posts edged up 2 percent, while truck posts fell 3 percent, bumping the van load-to-truck ratio from 5.2 to 5.5. The national average van rate increased 3 cents to $1.82/mile, higher than the average rates for June and July. The biggest rate jumps were on lanes heading to retail distribution centers in the Northeast in advance of back-to-school shopping season.

Rates are derived from DAT RateView, which provides real-time reports on prevailing spot market and contract rates, as well as historical rate and capacity trends. All reported rates include fuel surcharges. For the latest spot market load availability and rate information, visit dat.com/industry-trends/trendlines.