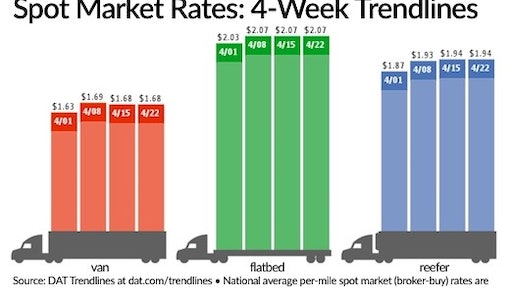 The national average spot truckload rates for van, reefer and flatbed freight held steady during the week ending April 22, while prices in many major freight markets continued a slow springtime climb, according to DAT Solutions, which operates the DAT network of load boards.

The average rate on each of these lanes hit their highest marks in the last six weeks:

Buffalo and Denver are the only markets where outbound rates are down more than 1 percent for the month.

The top five markets for van load posts were all in the south:

Last week reefer load posts held steady, while truck posts declined 2 percent. One market where freight patterns are shifting is Florida. Volumes were down, and wildfires and evacuations made it more expensive to move freight.

The largest drop last week was on the lane from Chicago-Philadelphia, which fell 23 cents to $2.37 per mile.