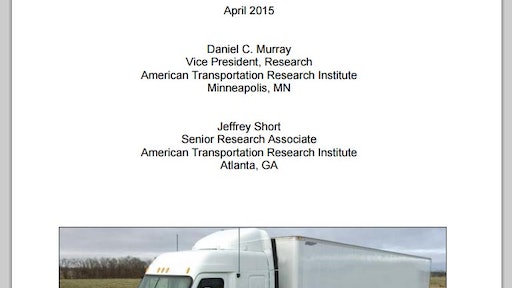 The American Transportation Research Institute (ATRI) released the results of a new analysis of the safety and operational impacts from the 34-hour restart provisions. In this latest of an ongoing series of Research Tech Memos, ATRI analyzed an extensive truck GPS database to identify changes in truck travel by time-of-day and day of the week that may have occurred after the July 1, 2013 change to the Hours-of-Service (HOS) restart provisions. ATRI also examined several years of pre- and post-July 1 federal truck crash data to quantify safety impacts resulting from the HOS rules change implemented by the Federal Motor Carrier Safety Administration.

The crash increases and operational shifts would ostensibly be independent of overall economic improvement since the statistical tool utilizes percentage change, and tonnage growth percentages over the 2-year period were relatively constant.  In addition, truck unit position points are a better indicator of physical truck movements than freight volumes.

ATRI’s report features some possible explanations for the GPS and crash data findings as a result of operational changes the industry had to make post-July 1, 2013. Among these are:

“After many years of crash decreases, everyone knows our industry has experienced an uptick in crashes,” said Dean Newell, vice president, safety of Maverick USA, Inc. and a member of ATRI’s Research Advisory Committee. “This latest analysis from ATRI validates both changes in operations and crash risk that seems to be associated with the restart rule.  Regulations should serve to improve safety, not create additional safety risks.”