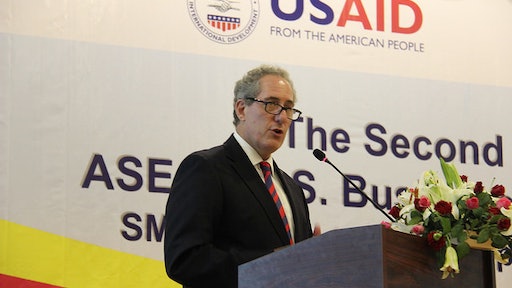 Agriculture Secretary Tom Vilsack and U.S. Trade Representative Michael Froman (pictured above) announced that the U.S. government has reached agreement with the government of Peru to remove barriers for U.S. beef exports to Peru that have remained in effect since 2003.

Agriculture Secretary Tom Vilsack and U.S. Trade Representative Michael Froman announced  that the U.S. government has reached agreement with the government of Peru to remove barriers for U.S. beef exports to Peru that have remained in effect since 2003, opening one of the fastest growing markets in Latin America to all American beef and beef products.

In 2015, the U.S. exported $25.4 million in beef and beef products to Peru. Since the U.S.-Peru Trade Promotion Agreement (PTPA) entered into force in 2009, U.S. beef and beef products have grown substantially but have been hampered due to burdensome certification requirements installed by Peru in 2003. This agreement, reached during Secretary Vilsack's trade and investment mission to Peru, removes those barriers – called the export verification program – and assures American ranchers of expanded market access.

"Since 2009, the United States and Peru have enjoyed one of the strongest bilateral trade relationships in the Western Hemisphere, and today it became much stronger," said Vilsack after meeting with officials from the government of Peru. "Since 2003, USDA and USTR have worked diligently to reopen and expand markets once closed to U.S. beef. This is another win in a long line of successes that led to a near-record U.S. beef and beef product exports in 2015. The Obama Administration will continue to work hard around the world to remove unfair barriers and create a more level playing for America's farmers, ranchers, producers and rural communities."

"Peru has been a growing market for American beef and this agreement will only further expand opportunities for American producers and exporters," said U.S. Trade Representative Michael Froman. "Not many years ago, there was little American beef going to Peru, but through the U.S.-Peru Trade Promotion Agreement, and agreements like this, we are seeing increased demand for high-quality American beef."

Bilateral trade of agricultural, fish and forestry products between the U.S. and Peru topped $3 billion in 2015 and has grown more than 110 percent since 2009.

The agreement reached today reflects the U.S.’s negligible risk classification for bovine spongiform encephalopathy (BSE) by the World Organization for Animal Health (OIE). Through an exchange of letters, the U.S. and Peru have agreed to changes in certification statements that will allow beef and beef products from all federally inspected U.S. establishments to be eligible for export to Peru, rather than only those beef and beef products from establishments that participated in the USDA Agricultural Marketing Service (AMS) Export Verification (EV) programs under the previous certification requirements.

Since 2009, USDA has removed numerous unfair restrictions to U.S. trade to help farmers export more. USDA has also led more than 225 U.S. agribusinesses and more than 20 state departments of agriculture on agricultural trade missions to countries around the world, including Peru.

Peru is also a member of the 12-nation Trans-Pacific Partnership (TPP), which concluded negotiations in October 2015 on a historic trade agreement. Passage of TPP by the U.S. Congress will provide new market access across the board for America's farmers and ranchers by lowering tariffs, eliminating barriers, boosting exports and supporting jobs in America's rural economies.