Members of the Maritime Port Workers’ Federation of Costanera Espigón (Fetraportces) in Chile began their latest indefinite walkout on Saturday after failing to reach an agreement with port managers over shift patterns. 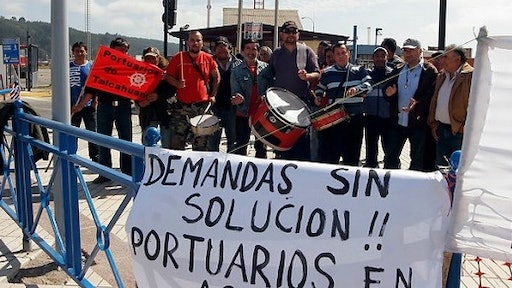 This photo is from the last union strike in January of 2014 in the Chilean Port of San Antonio. Leaders from Asoex and Fedefruta are asking the union to honor commitments made in October that they would not impede fruit from being loaded at the Port.

Chilean fruit producers and exporters are warning that a strike by workers at the Port of San Antonio could cause significant losses for the industry, according to Fruitnet.com. Members of the Maritime Port Workers’ Federation of Costanera Espigón (Fetraportces) began their latest indefinite walkout on Saturday after failing to reach an agreement with port managers over shift patterns.

Juan Carolus Brown, president of producer association Fedefruta, pointed out that the fruit industry had not only had to absorb the losses caused by strikes in 2013 and 2014, but had also agreed to a pay new tax to fund commitments made by the state to retroactive payments to port workers and to prevent further strikes such as the current action.

“As the ones footing the bill we are appealing to those involved to respect the agreements that have been put in place,” he said.

Brown called on Fetraportces president Diego Silva to honor a commitment made by the unions in October that they would not impede fruit from being loaded at the Port of San Antonio in the event of future strike action.