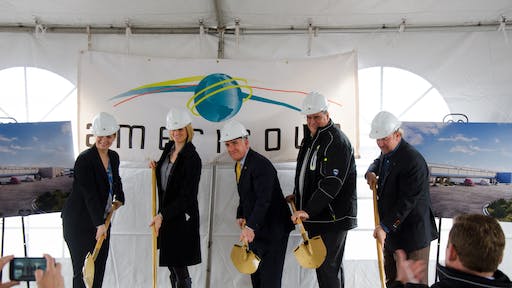 Americold, the global leader in temperature-controlled warehousing and logistics to the food industry, has officially broken ground in Clearfield, Utah to expand its site located at 755 E. 1700 St.

This project will add 6.5 million cubic feet of temperature-controlled warehouse space to Americold’s current 11.2 million cubic foot facility on the site. Together with its Salt Lake City facility, this expansion significantly extends Americold’s market leadership within the Greater Salt Lake City Metro Area to more than 50 percent of total available capacity, triple that of its nearest local competitor.

“We are excited to be able to provide the additional capacity in Salt Lake City that our customers have requested. The new building should be operational in time for our peak volumes during the fourth quarter of 2017,” says Fred Boehler, president and CEO of Americold.  “I thank the representatives of the City of Clearfield, Davis County and the State of Utah for their support in this project’s development.”

Utah’s population has grown roughly 6.1 percent between 2010 and 2014, versus overall U.S. population growth of approximately 3.1 percent, making it the fourth fastest growing state in the nation. This growth has been recognized by Americold’s customers, who are enacting their own expansion plans within the region. And, with easy access to Utah Interstates 15 and 80, Americold’s Clearfield location is well positioned for local, regional and national distribution.

“Clearfield recognizes the value which Americold brings to the City,” says Clearfield Mayor Mark Shepherd. “This expansion signifies a continuation of a great partnership with Americold, as well as the beginning of new growth and vitality within the city. It is great to see business not only come to Clearfield, but to thrive in Clearfield.”

“Americold joins the list of great companies whose experience doing business in Utah has led to increased investment in the state,” adds Theresa Foxley, president and CEO of The Economic Development Corporation of Utah. “We congratulate Americold on their expansion and commend Clearfield City and Davis County on creating such a business-friendly, local economy.”

More information about Americold is available at www.americold.com.

Americold Adds an Automated Facility to its Global Network