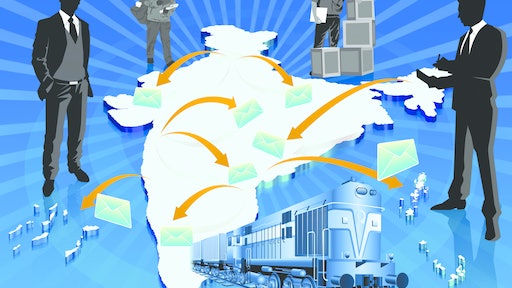 For the past decade, investors and finance reporters worldwide have set their sights on India. The country has the fourth largest economy in the world and the potential to become a major food supplier. However, the single most critical problem facing the Indian agricultural industry is a highly inefficient supply chain. Approximately 30-40 percent of all the food produced in India is wasted due to lack of cold chain infrastructure.e.
India’s National Horticulture Board (NHB) estimated that as of December 2006, there were 5,101 cold stores in India with a total capacity of 3.295 billion cubic feet (93.31 million cubic meters). Dr. Ravinder Kumar Sharma, the Senior Deputy Director of NHB, noted that of the total cold storage capacity in India, “about 80 percent is private refrigerated warehouses, 15 percent is owned by corporations, and 5 percent is in the public or common sector (such as government owned).” The latter two are perhaps the most comparable to the Public Refrigerated Warehouses (PRWs) found in the Western Hemisphere in that they do not own the products they store.
This makes India the third largest PRW market in the world after the United States and Japan, according to the 2008 IARW Global Cold Storage Capacity Report.
Yet, many of the cold storage facilities in India are woefully outdated.
In 2008, the Indian Department of Agriculture conducted a study of approximately 29 percent of India’s cold storage facilities to understand and address technology issues. The subsequent report gave a rare glimpse into the current operations and needs of a typical Indian cold store facility.
In summary, the report found that in addition to poor design and low technology levels, condenser sizes are often inadequate, employees are frequently inexperienced, and most cold stores do not prescribe to any national or international hygienic standards.
These technological and operational limitations result in high energy waste, increased time from farm to market, an escalation of costs, and, ultimately, a deterioration of product quality and value loss.
At the same time, since the cultivation of fruits and vegetables is largely regional, entrepreneurial success will be largely contingent upon timely transportation of produce. Traditionally, farm produce is harvested and transported to cold storage after minimal processing, curing, and so forth at the farm and transportation is carried out during low-temperature hours of the day.
“There are no refrigerated carriers in India,” said Sharma. “Products meant for both export and domestic sale are transported at ambient temperature and typically via an open truck at night when it is cooler.”
Most of the refrigerated trucks found in India are smaller than international standards and, hence, not cost effective. The Indian government has reduced import duty on such trucks by 10 percent to encourage importation. As a whole, refrigerated transportation is rapidly expanding in the country. Shipment of controlled temperature air cargo in and out of India, for example, is expanding at 6 percent annually.
There are a number of gaps in India’s cold chain, beginning with a need for research and development to standardize and enhance processes from postharvest handling to maintaining proper temperatures throughout the cold chain and improving cold chain technology.
There is also a gap in human capital. The cold chain in India needs trained cold chain professionals to bolster operations, including operators, engineers, security specialists, and logistics managers.
These needs cannot be met without the help of the private sector, and many officials in India see public-private partnerships as the way to build the country’s cold chain and, as a result, India’s economy as a whole.
The gap for stationary cold storage infrastructure is over 60 percent and a whopping 80 percent in refrigerated transportation. Investments of over USD $100.4 million will be required meet these shortages.
The Government of India has introduced a series of financial incentive schemes to encourage cold chain development. Over the past decade, India has continued to substantially liberalize its foreign trade policy. Today, foreign direct investment (FDI) is allowed in almost all sectors. In 2006-2007 alone, FDI in India hit USD $9.3 billion. FDI up to 100 percent equity is permitted under the automatic route in food and infrastructure like food parks and cold chains.
Also, investments in cold chain infrastructure could be given a 10-year tax holiday under section 80 1A of the Income Tax Act.
However, there have been instances where government incentives have actually compounded the cold chain issues the country faces. For example, the NHB report suggested that because government schemes do not include design specifications, the primary criteria for constructing a cold store is to construct the facility at the lowest possible cost in order to maximize immediate gains. This not only compromises design standards, but increases inefficiencies in the cold chain.
Foreign government agencies, such as the U.S. Department of Agriculture, are also developing programs to help foreign investors break in to the Indian market. Recently, USDA supported a Cold Storage Short Course that GCCA held at Amity University in New Delhi, India.
For more information about the Indian cold chain, contact Atul Khanna at akhanna@gcca.org. ?
Atul Khanna is the Dir. of the Global Cold Chain Alliance (GCCA) India Division and principal of i2i Consulting in New Delhi. Tori Miller Liu is Dir. of Information Systems for GCCA and contributor to COLD FACTS magazine. The full-length version of this article was originally published in the May-June 2009 issue of COLD FACTS, a bimonthly GCCA membership publication focusing on cold chain trends and best practices. To learn more about COLD FACTS or how to join GCCA, visit www.gcca.org/membership or contact email@gcca.org or (703) 373-4300.

Cold Chain Blocking India’s Destiny To Be A Processing Powerhouse