The goal of the “waveless” method is to get the order to the consumer as fast as possible and only induct new work as work is completed. 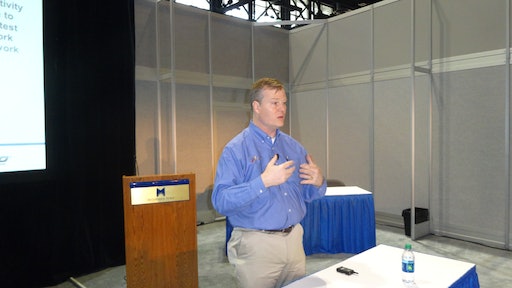 Art Eldred of Vargo Companies explains the benefits of waveless picking during the ProMat show in Chicago.

One of the most prevalent themes at the exhibits on the ProMat trade show floor at Chicago’s McCormick Place South last week was e-commerce. Many exhibits offered tools to help supply chains adapt to the rapid rise of e-commerce. What many attendees may or may not realize, however, is that the traditional method of picking products in the fulfillment center – “wave” picking – is not the most efficient system for companies fulfilling e-commerce orders.

“We’re trying to use an antiquated process to fulfill e-commerce,” observed Art Eldred, client executive for system engineering at VARGO Companies, a material handling solutions provider. Eldred spoke during a seminar, “Autowave transitions – the best fit for e-commerce fulfillment.” The seminar was held on both Tuesday and Thursday during the ProMat show.

A wave is a group of orders that are gathered during a specified time period to create a single entity of work. This single entity of work doesn’t begin until work begins on the first item and doesn’t end until work finishes on the very last item. As the wave works its way through the DC, the WMS plans labor on the amount of work to be completed with no regard for the amount of work in progress or how the work is being completed in the packing process.

Eldred noted that e-commerce continues to grow while traditional brick and mortar retailing is stagnant if not declining. “Our consumers have changed their buying behaviors,” he said.

The wave method spends a lot of time monitoring exceptions in the fulfillment process. “It’s the exception processes that are driving waves crazy,” Eldred said. For the e-commerce environment, this is more of a problem since there are usually more SKUs and individual item picks involved than in traditional retail environments.

“We need to react as fast as we possibly can to our e-commerce clients,” he said.

Eldred’s company uses the term “autowaving” to refer to the system of automatically allocating labor to orders. He notes that the warehouse execution system (WES) is a key tool in enabling this capability.

The WES is a software that combines capabilities of both the warehouse management system (WMS) and the warehouse control system (WCS). Traditionally, WMS software assigns work to the WCS, which controls the material handling tools. A WES better synchronizes and sequences work amongst all work resources, resources being both machines and people.

The WES manages real-time information about all the available work resources and every tool interaction with those resources to process the orders and prioritizes the work.

The waveless system is more productive, according to Eldred. He said one of his company’s operations has observed a sorter efficiency increase by as much as 56 percent under a waveless system.

“In no case will waveless picking be less efficient than a wave-based system,” he said. “That exception monitoring can take a whole entity and just kill it. A waveless environment works very well with handing exceptions.”

“What we want to do is execute the work differently,” Eldred said.