Will The Northeast Be Ready For Post-Panamax?

A deeper Panama Canal will give everyone along the East Coast a chance to seize more market share, but a gridlocked and fragile highway system could hurt the region’s ability to compete. 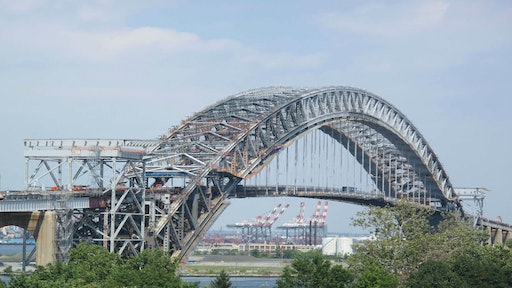 The Bayonne Bridge is only 151 feet above the water and larger container ships often cannot cross under it to reach marine terminals – Port Newark, Elizabeth and Howland Hook in Staten Island. Once the renovation is complete the Bridge will have a clearance of 215 feet.

With the long anticipated expansion of the Panama Canal now 93 percent complete according to the Panama Canal Authority, logistics operations up and down the East Coast of the U.S. are finally getting closer to seeing this “game-changing” event become reality. Business has already been brisk in 2015 at many Northeastern ports along the Atlantic, mainly due to the labor issues at West Coast ports. The re-opening of an expanded Panama Canal in early 2016 could tip even more market share to the East Coast and allow it to hold onto its recent record-setting volumes.

According to Edina, Minn.-based import/export data provider Zepol, total imports along the East Coast has increased by 15 percent through June of 2015 when compared to 2014. Recent research by The Boston Consulting Group and Eden Prairie, Minn.-based 3PL provider C.H. Robinson also has predicted that up to 10 percent of container traffic could shift to the East Coast following the expansion of the Canal by the year 2020. Hence, there is plenty of reason for logistics operators in the Northeast to be excited.

While there’s little doubt that the shift in container traffic from China and East Asia will soon be reaching the shores along the East Coast, there is a little uncertainty on whether the transportation infrastructure in the Northeast will be able to handle the increase cargo demands. The megaships are coming … is the Northeast prepared?

To their credit, many of the ports in the Northeast have had the foresight to initiate infrastructure projects aimed at handling the larger post-Panamax ships. The Port of Philadelphia spearheaded the Delaware River Main Channel Deepening Project that stands to benefit every port along the river’s corridor from Delaware up to Pennsylvania by lowering the main depth of the river to 45 feet.

The state of New Jersey and the Port Authority of New York & New Jersey also get credit for the Bayonne Bridge Navigational Clearance Project that will raise the bridge from 151 feet to 215 to accommodate the bigger ships into the Port Newark Elizabeth Marine Terminal.

But time and time again, industry insiders say their worries aren’t focused on the ports and their ability to handle the increased cargo, but on a crumbling highway system that is already incapable of transporting current levels of traffic.

“The northeast highway system is a severely limited. Washington D.C., Philadelphia, New York, and Boston are traffic nightmares, and the worst traffic in the entire U.S. may very well be in Fairfield County, Conn.,” says John Haggerty, vice president business development at Milford, Del.-based supply chain solutions provider Burris Logistics. “The ports concern me much less than the highways.”

“A major concern is the dependence on a fragile highway system in an era of scarce funding for ongoing maintenance for roadways and especially bridges,” says John Haroldson, manager of international trade at the Port of Wilmington in Wilmington, Del. “Last year, repairs to the I-495 bridge just outside the port closed our highway link, requiring almost three months to restore both north and southbound traffic. Truck access was severely hampered as vehicles choked local roads seeking detours.”

“Highway networks have certain areas that need updating, but the densely populated areas pose challenges,” says Michael Landsburg, vice president real estate, at Cherry Hill N.J.-based logistics provider NFI Industries. “Compared to areas like the Southeast, there is much less open space in the Northeast to build new highway networks or provide detours while construction is going on. As distribution gets closer to end markets and customers, traffic congestion and volume of trucks and cars on the roadway will continue to be a limiting factor.”

A gridlocked and constricted highway system could open the door to opportunities for rail and short-haul intermodal transportation to solve the traffic problems. The problem is that the Northeast’s railroad infrastructure is in need of a major overhaul as well.

Preparing for the future and 'cascade' effect

Even though almost every port in the Northeast has invested recently in upgrading their infrastructure, one of the most popular projects and the one that could have the biggest impact is the Bayonne Bridge project in New Jersey.

“The recent lane expansion on the New Jersey turnpike was significant, but the Bayonne Bridge project, once completed, will make Port Elizabeth accessible to the Post-Panamax megaships which currently cannot fit under the bridge,” adds Haggerty. “Currently, Norfolk, Baltimore, Charleston, and Miami are well positioned to benefit in the Post-Panamax era, as will New York when they complete the Bayonne Bridge, but the completion date seems to be a moving target.”

While many may see the Bayonne Bridge project at the Port of New York/New Jersey as a “rich get richer” proposition where the biggest port in the Northeast gets the major share of the increased traffic, others are more optimistic. The ports that are already built to handle the larger container ships will be the first to reap the benefits. But as the new ships start coming into port, the current traffic may need to find a new port to unload cargo.

“The liner services will continue to gravitate to these ‘infrastructure rich’ terminals like New York/New Jersey, Baltimore and Norfolk,” says Haroldson. “Nevertheless, there will be a ‘cascade’ effect of relatively larger ships appearing in all trade lanes. This will include the Delaware River and Wilmington.”

The resulting ripple effect from the top down has the Port of Wilmington expanding the infrastructure for its prime perishable business. The port has recently started a major berth reconstruction project, which will include extending existing gantry crane rail from four to five berths. The project also includes two new ship-to-shore cranes which will give the port four rail-mounted gantry cranes covering five berths, supplemented by a mobile harbor crane that will provide lifting capacity through six berths.

The New York/New Jersey and Wilmington ports are not alone when it comes to infrastructure investment. The Port of Baltimore has big plans for its redevelopment at Sparrows Point Terminal (SPT), the site of a former steelmaking facility. Once done, the $48 million project hopes to make SPT a hub for port-related, energy and advanced manufacturing and distribution uses.

The Port of Philadelphia also recently announced plans to expand the Southport Marine Terminal into a 194-acre complex has progressed past the request for expressions of interest (REI) stage and into the request for qualifications (RFQ) phase in its search for a public-private sector partnership to finance the project.

The Northeast region certainly has its share of infrastructure issues to contend with. But with the expanded capacity and a plethora of post-Panamax options opening up along the entire East Coast, there’s no denying shippers throughout the global supply chain will benefit from the completion of the expanded Panama Canal.

The Port Authority of New York and New Jersey, www.panynj.gov