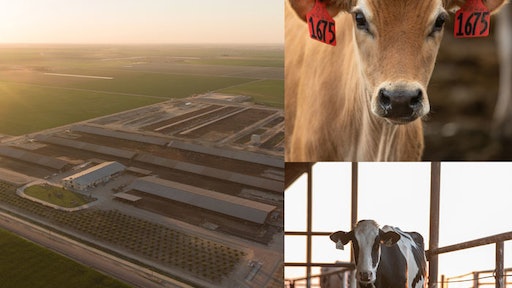 New research published in the Journal of Dairy Science finds the climate footprint of milk production in California has been significantly reduced over the past 50 years (1964 to 2014). The amount of greenhouse gas emissions produced per unit of milk was reduced by more than 45 percent. Scientists at the University of California, Davis conducted a life cycle environmental assessment (cradle to farm gate) of California dairy farm production, using the latest scientific models and international research standards.

The study’s key findings are as follows:

Over the past 50 years, California dairy production has undergone significant advancements, from animal feeding and housing practices to overall animal and crop production efficiency. The researchers expect that as milk production per cow continues to increase through improved feed formulations, reproductive efficiency, and management techniques, it will lead to further improvements in dairy farming’s environmental footprint.

As the study documents, more than 40 percent of dairy feed ingredients in California are byproducts of other agricultural and food production processes, such as almond hulls, citrus and tomato pulp, culled carrots and other similar products that are not suited for human consumption but make healthy, nutritious feed for cattle. As a result, nearly half of the feed needed to produce California milk—which represents about 20 percent of all U.S. milk—is being provided without a single drop of additional water. Dairy cows are efficient recyclers, making use of food and agricultural byproducts that are either indigestible or undesirable for humans and avoiding the need to landfill or otherwise dispose of these materials.

“Cows are natural bioprocessors and upcyclers of nutrients,” said Dr. Kevin Comerford, Chief Science Officer for CDRF. “As a result, cows will continue to play essential roles in healthy and sustainable food systems all over the world. This study demonstrates the environmental benefits in California, where dairy farmers have been especially successful in recycling and repurposing resources.”

While the analysis demonstrates significant reductions in greenhouse gas emissions intensity (more than 45 percent), these estimates can be considered conservative, and more progress toward climate-smart practices continues to be made. The research does not factor in the implementation of large solar panel arrays, which has occurred on more than 150 dairy farms in California and represents a significant shift toward renewable energy. The California Department of Food and Agriculture has also reported that through the implementation of dairy methane reduction projects, California’s dairy farms will soon be more than halfway to achieving the state’s world-leading target (a 40 percent reduction in manure methane emissions), equating to millions of metric tons of greenhouse gas reductions each year.

“California dairy farms have made major improvements in environmental performance over the past 50 years,” said Denise Mullinax, Executive Director of CDRF. “We know our farms are continually increasing their overall efficiency. This study advances our understanding of the environmental benefits and verifies that farmers are on a path toward continued improvement.”

This research was supported by California Dairy Research Foundation and the Sesnon Endowment fund of University of California, Davis.

Just in Time for Valentine's Day: There's Now a Tinder for Cows