The report highlights the company’s 2013 achievements in the areas of environmental performance, social responsibility and good governance. 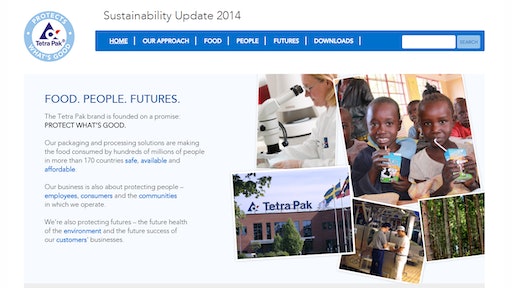 Tetra Pak® released its Sustainability Update 2014. The report highlights the company’s 2013 achievements in the areas of environmental performance, social responsibility and good governance.

Examples of the company’s progress in 2013 included:

Tetra Pak and Tetra Laval Food for Development expanded joint activities on dairy hubs. In partnership with PRAN Dairy Ltd., two dairy hubs were set up in Bangladesh as collection stations with testing and cooling facilities, while at the same time serving as training centers for the local farmers. This has enabled the average daily yield per cow to rise by 80 percent and the average monthly income of 2,000 smallholder farmers to more than double from October 2010 to December 2013.

Tetra Pak continued to lead the industry towards fully renewable packages. In 2013, 1.1 billion packages were delivered to customers featuring bio-based caps (made from plastic derived from sugar cane), nearly doubling the number sold in 2012.

Tetra Pak’s processing and packaging innovations supported a further reduction of food waste. The introduction of Tetra Alcross® RO Lite​ in 2013 provided small and medium-sized cheese producers with a filtration solution that extracts value out of whey, a by-product of cheese manufacturing that was dumped as food waste in the past.

Tetra Pak put considerable effort into developing robust systems and methods to reliably collect climate data. The 2013 results, which have been audited and validated by independent external consultants, showed that the company is making steady progress towards its 2020 targets – to cap climate impact across the value chain to 2010 levels, despite business growth.
“The Tetra Pak brand is founded on a promise: Protect what’s good. At its core, that’s about protecting food … which has long lain at the very heart of our business agenda. But it goes further. It is also about protecting people: our employees, the communities in which we operate, and society as a whole. And it is about protecting futures; by developing the products and services that will support the future business growth of our customers, and by acting and operating in ways that best protect the future of our planet,” said Dennis Jönsson, president and CEO, Tetra Pak Group, “Tetra Pak produces the Sustainability Update on an annual basis to explain how we are delivering on that promise.”

The full Tetra Pak Sustainability Update 2014 can be found on ​sustainability.tetrapak.com​.