Futurist Jack Uldrich subtitled his presentation as “The Big AHA,” the three letters standing for awareness, humility and action. 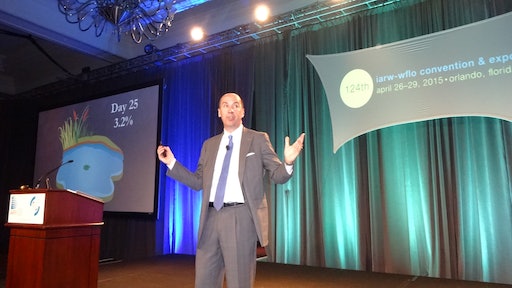 Every time you put on the news, whether via TV or on your smart phone, you hear about change. Technology is changing the way we do things. So how do you prepare for change, and what new technology will affect your job the soonest? These are some questions that futurist Jack Uldrich tried to answer during the first keynote presentation at the International Association of Refrigerated Warehouses – World Food Logistics Organization convention and expo in Orlando, Fla.

The title of Uldrich’s presentation was taken from name of his book, “Foresight is 20/20.”

He subtitled his presentation as “The Big AHA,” the three letters standing for awareness, humility and action. These are the keys to accepting and managing change. Uldrich spent most of his time describing technologies that his listeners will have to address.

“This change demands we take action,” he said.

The need to understand change, no matter how big, is not always obvious.

To demonstrate this point, he showed a picture of an Ace playing card and asked his listeners what they noticed about it. The Ace playing card has existed longer than anyone in the audience has been alive, yet not everyone recognized that the card on the screen never existed because it was red and not black.

The inability to see change happening before our eyes is what makes humility an important part of understanding change. By recognizing that change is not obvious, we are more likely to have an open mind.

Uldrich presented his list of technologies changing the world today. He said most of these will change the cold storage industry in some way.

Additive manufacturing, also known as 3D printing. This is a computerized manufacturing process that positions material in layers. Objects are created from a three-dimensional model. Uldrich said the cost of this technology is falling quickly. He said General Electric is using it to make jet engines. Chinese companies are using it to build custom-designed homes.

Oculus Rift. This is a virtual reality headset that allows users to step inside virtual worlds. A teenager conceived the idea. The creators raised their funding on Kickstarter, the online crowd funding website. Facebook eventually bought Oculus Rift for $2 billion.

Oculus Rift is now being used by automaker Tesla in its 3D printing operation, Uldrich said. Hence, two of the key new technologies are merging.

Nanotechnology. This involves the manipulation of matter on an atomic, molecular, and supramolecular scale. Uldrich said it will impact the storage and distribution industries since it will allow for more “intelligent packaging” materials, such as material that resists corrosion.

Robotics. Robotic equipment has already emerged in distribution warehouses. The machines take the place of humans in dangerous environments or manufacturing processes. Uldrich pointed to self-driving vehicles as another example of robotic technology. He said the self-driving car is already legal in Florida and California.

Internet of things. This refers to the network of physical objects embedded with electronics, software, sensors and connectivity that exchange data with the Internet. Uldrich said by 2020, there will be 50 billion physical objects connected to the Internet. There will also be a 40-fold increase in “smart” buildings. He said Trane, the air conditioning manufacturer, is putting electronic sensors on all of its equipment to reduce service calls.

Gene sequencing. This is a laboratory process that determines the complete DNA sequence of an organism's genome at a single time. Uldrich said the cost for this falls in a half every four months. He said this technology holds promise in keeping produce fresh longer. It was recently reported that an apple was genetically sequenced so that it never browns.

Computer processing power. The rising power of computer processing is allowing software to solve more problems. Uldrich said a company in Milwaukee was able to save a million dollars by making its delivery routes more efficient. Software has great potential in allowing companies to understand their customers’ needs better. Companies will be able to address customer needs even before they are asked.

Solar and fuel cell technology. These are alternate sources of electrical energy. The warehouse and distribution industries have deployed these types of energy in transportation, equipment and temperature control.

Advances in data storage. Because of expanding data storage, companies are able to find ways to improve efficiencies. Uldrich said Amazon has doubled its warehouse efficiency in the past five years. They takeaway here is that Amazon has recognized that its main business is data. By mastering data, Amazon will be able to know what customers want before they place their order.

Uber. Uber, the best known mobile phone managed ride share service, is changing the consumer’s relationship with cars, according to Uldrich. He pointed to the fact that Daimler, the German car maker, is providing car sharing services in European and U.S. cities. But the trend isn’t limited to personal transportation, according to Uldrich. He sees it extending to the trucking industry as well.

Transitioning much of the burden from manual processes to automated tools enables companies to pivot and adjust to the broader economy's known and new impacts.
Extensiv (formerly known as 3PL Central)
January 6, 2023
Follow Us