MV Rena splits in two off of New Zealand coast. About 150 cargo containers also spilled from the Rena, and officials were warning beachgoers to stay away from the debris that has washed ashore. 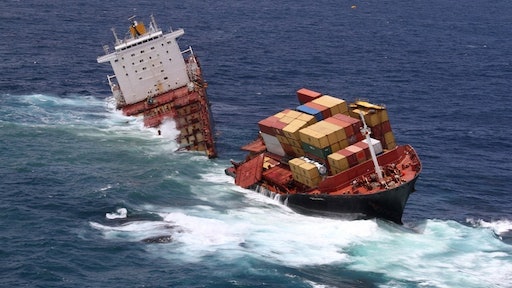 Wellington, New Zealand: A light sheen of oil extended about two miles (three kilometers) from a wrecked cargo ship that split in two over the weekend, but so far the damage appears small compared to the environmental disaster created when the vessel ran aground in October, New Zealand authorities said Monday.

About 150 cargo containers also spilled from the Rena, and officials were warning beachgoers to stay away from the debris that has washed ashore. Some people have been seen scavenging bags of powdered milk from the beach, but authorities warned the food may be unsafe.

Bruce Fraser, a spokesman for Maritime New Zealand, which oversees shipping, said it estimates that fewer than 100 tons of oil remains on the wreck.

The Rena spilled about 400 tons of fuel oil when it ran aground Oct. 5 on Astrolabe Reef, 14 miles (22 kilometers) from Tauranga Harbor on North Island. That spill, considered the worst maritime environmental disaster in New Zealand history, fouled pristine beaches. Authorities found 2,000 dead seabirds from the spill and estimate 10 times as many might have perished.

Since then, salvage crews have removed about 1,100 tons of oil from the ship, along with nearly 400 20-foot and 40-foot containers. It was a slow process to remove cargo from the wreck, however, and hundreds of containers remained by the time pounding seas broke it apart.

The two pieces of the ship are now too precarious for crews to attempt further salvage efforts, at least until the seas calm. Salvage crews are now focused on preventing more of the shipping containers from washing ashore.

Tugs have pulled some containers away from the coast. Some containers have had buoys or locator beacons attached to them so they can be more easily recovered when sea conditions allow.

The debris that has washed ashore includes milk powder, timber, plastics and paper.

Waihi Police Sgt. Dave Litton said police closed public access to popular Waihi Beach on Monday morning after four cargo containers and other debris from the vessel washed ashore. He said police received calls about people driving off with some of the bags of milk powder that are strewn along the beach.

Authorities say the milk and other items washed ashore could be health hazards.