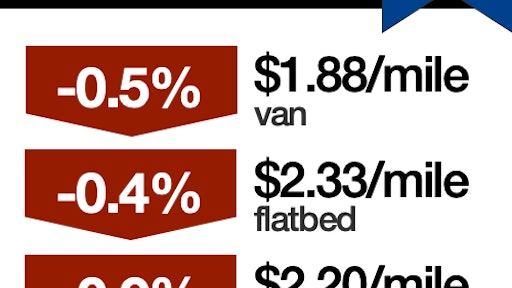 National average spot truckload rates for vans, reefers, and flatbeds slipped lower during the week ending March 2, said DAT Solutions, which operates the DAT network of load boards. High-traffic van lanes are looking up, especially on the West Coast, and rates on key flatbed lanes are starting to respond to increased construction and other activity:

Compared to the previous week, the number of load posts on DAT MembersEdge was up 3 percent while truck posts fell 2 percent. The result? Higher load-to-truck ratios, usually a sign that rates are firming up.

Pricing on DAT’s 100 busiest van lanes by volume seems to have turned a corner thanks to improving activity at West Coast seaports. Van volumes from Seattle were up by double digits compared to the previous week and several key van lanes moved higher:

Seattle is the closest seaport to China; look for activity from Los Angeles and other West Coast ports as goods there are processed and released in the coming weeks.

National average spot flatbed rates have ticked up and down during the last month despite volumes being up 15 to 20 percent in February year over year. One reason: there’s more available flatbed capacity, both in the number of trucks on the road and the utilization of existing equipment. Lanes with big price increases last week:

Oil-related freight movements from Houston are definitely in a lull. Texas has been experiencing freezing temperatures of late, even in South Texas, leading to lower rates. The average flatbed rate from Houston was $2.28/mile, a 3-cent drop compared to the previous week.