The national average spot van rate increased 6 cents to $2.14/mile during the week ending Dec. 8 although demand for trucks was weaker on high-traffic lanes for retail and e-commerce freight. 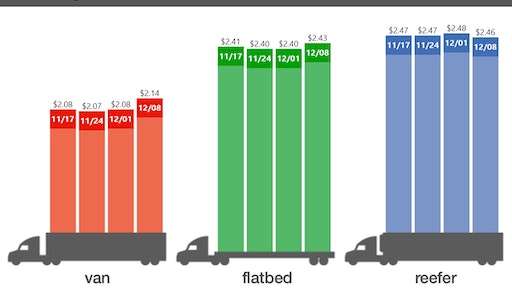 The national average spot van rate increased 6 cents to $2.14/mile during the week ending Dec. 8 although demand for trucks was weaker on high-traffic lanes for retail and e-commerce freight, said DAT Solutions, which operates the DAT network of load boards.

Lower fuel prices continue to exert downward pressure on the spot rates, which incorporate a surcharge portion. The national average price of on-highway diesel fell 4.6 cents to $3.16/gallon, its lowest point since the end of April.

The number of van load posts on DAT load boards was down 13 percent last week while truck posts surged 53 percent as truckers returned from the previous holiday week. Looser capacity pushed the load-to-truck ratio down to 5.5 loads per truck compared to 7.2 the previous week.

Despite the higher national average rate, momentum in the spot van market stalled by midweek as freight volumes fell 5.3 percent on the Top 100 lanes. Rates on those lanes slumped as well, with 62 lanes down an average of 1.9 percent, or roughly 4 cents per mile, compared to the previous week. There were large drops in van freight activity in Atlanta, where the number of posted loads fell by 11.3 percent, and Los Angeles, down 8.9 percent, among other van freight hubs.

Absent a rebound this week, the anticipated holiday peak for van freight appears to be muted.