Demand for vans and refrigerated trucks on the spot truckload freight market was exceptionally strong during the week ending Dec. 1. 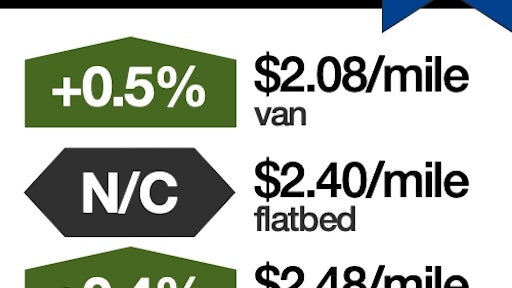 Demand for vans and refrigerated trucks on the spot truckload freight market was exceptionally strong during the week ending Dec. 1, said DAT Solutions, which operates the DAT network of load boards.

As expected, load posts and truck posts increased significantly in a week that follows a holiday-shortened week. The number load posts was up 54 percent while truck posts gained 21 percent. Demand is expected to remain strong through the holidays.

Rates were higher on 63 of the top 100 van lanes, including several that are strong for retail freight:

Outbound rates from Los Angeles are 11 percent higher than they were a month ago, but several lanes declined last week, including L.A. to Dallas, down 24 cents to $2.41/mile.

Reefer trends: Reefer load posts surged 46 percent, more than expected when going from a holiday week to a non-holiday week, and truck posts increased 10 percent. That caused the national load-to-truck ratio to jump from 6.2 to 8.3 loads per truck.

With the holidays approaching, meat and potato-growing regions in the Midwest saw big upticks in reefer volumes, and fresh fruit and vegetables boosted load counts out of California.

The biggest reefer rate increases were scattered on lanes across the country: