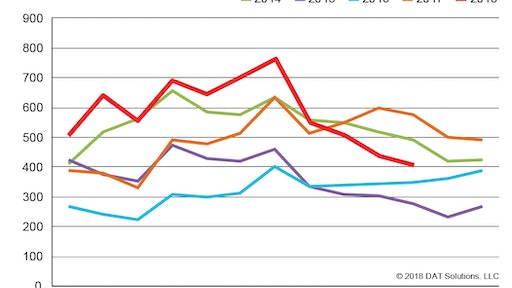 Severe weather in Asia and the U.S. Eastern seaboard slowed seasonal freight flows in October, leading to truckload transportation delays at U.S. ports, according to DAT Solutions, which operates the DAT Freight Index, a measure of load posting volume on the DAT network of load boards.

As a result, spot market freight availability hit a low point for the year in October. October volume was 7 percent lower month over month, and 33 percent below October 2017 levels.

Truckload freight rates also slipped lower for all equipment types, compared to September. Rates remain well above 2017 levels, however, due partly to an increase in fuel surcharges that compensate for rising diesel costs.

“We expected a seasonal rebound in October but it was interrupted by Hurricanes Florence and Michael in the Southeastern U.S., as well as Typhoon Mangkhut in Hong Kong,” explains DAT market analyst Peggy Dorf. “Some of that demand for truckload capacity has shifted into early November, with imported goods moving from sea ports to regional distribution centers across the country.”

The DAT Freight Index reflects load posting volume on the DAT network of load boards, and 100 on the Index represents the average monthly volume in the year 2000. Additional trends and analysis are available at DAT Trendlines. Referenced rates are the averages by equipment type, based on $57 billion of actual transactions, as recorded in DAT RateView. Rates per mile include fuel surcharges, but not accessorials or other fees.