The number of trucks on the spot truckload freight market didn't keep pace with demand from shippers wanting to move goods before the end of the first quarter and the start of Easter holidays, sending rates and load-to-truck ratios higher. 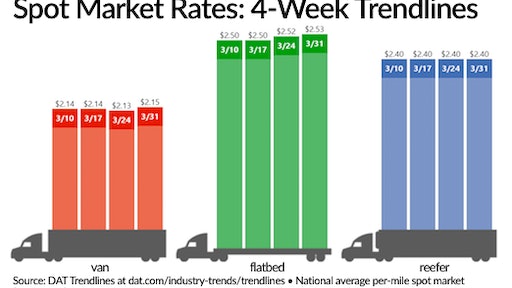 The number of trucks on the spot truckload freight market didn't keep pace with demand from shippers wanting to move goods before the end of the first quarter and the start of Easter holidays, sending rates and load-to-truck ratios higher.

FLATBED OVERVIEW: After a 5.6 percent increase in load volume the previous week, flatbed freight availability jumped 7 percent while capacity fell 7.5 percent. The flatbed load-to-truck ratio increased 16 percent to 101.5 last week and has risen steadily since November, when it was as low as 26.

REEFER OVERVIEW: Heading into Easter weekend, the number of reefer load posts dipped 1.2 percent while truck posts fell 2 percent. The national average rate was unchanged and rates were lower on 37 of the top 70 reefer lanes. Pricing from the Southeast and West show that shippers in the Southeast and West have produce to move, however:

The national average spot van rate hit a record high of $2.46 per mile during the week ending Oct. 4 and the overall number of available loads increased 5% compared to the previous week as supply chain disruptions push freight to the spot market.
DAT
October 7, 2020
Follow Us